Tales of a Not so Smart Miss Know it All

“If you want something quick, simple, girly and fun, Dork Diaries is a good series for you.”

This book has a group of friend,bullies and parents in this book bullies decorate a garden with toilet paper a few minuets later they realise they have done it to the wrong house and the house they was doing it to the people weren’t home but a few moments later they return and it’s the headteachers house and they get caught. The next day they get called into the school and get expelled. 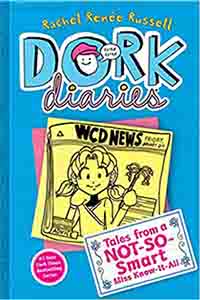