For Reading Addicts asked me if I would write something for their site, very nice of them too, thank you for the invite. First task is to choose what my favourite genre; second task is to choose five books from that genre and write about them.
First things first then; favourite genre. That has to be science fiction. At one time I only read sci-fi and I lost count to how many I got through years ago. Even this year I can’t remember how many of them I’ve read, along with crime, adventure, political and so on. I’ve also re-read four of the Harry Potters this year too. So then – my favourites

“I may not have gone where I intended to go, but I think I have ended up where I needed to be.” ~ Douglas Adams 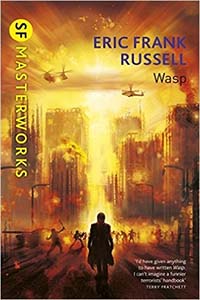 Earth is at war yet again (when will we ever learn?), this time with an alien race called the Sirian Empire. Earth has the better weapons but The Empire has more men to throw into battle. Then along comes James Mowery who under goes surgery to change not only his looks but his skin colour too, he ends up with blue skin so he can fit in with the locals. Mowery is deposited on an enemy plant where he sets out to become a real pain in the rear end of the enemy, hence the title Wasp. Think of the panic there is now when a wasp get to close – get the idea?

A pestilence strikes earth and as always there are survivors, one of them Isherwood Williams. Ish, as he becomes known as lives a lonely life even after he arrives in San Francisco. He sets up home in a house and eventually he sees evidence of another survivor, this time a woman. Between them, their children and more survivors who make their way to the growing community, life begins to flourish again. Eventually the community decides to move from their local and begins the long journey. 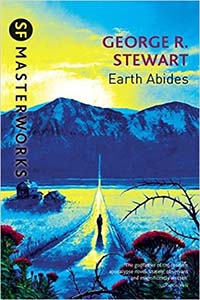 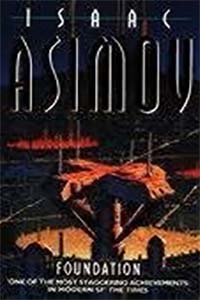 Made up three novels, Foundation, Foundation and Empire, Second Foundation, all written over three years 1951-53. Mankind has spread throughout the galaxy and has lived as an empire for 12,000 years. However, cracks are showing and the empire is slowly dying. Along comes Hari Sheldon who sees 30,000 years of war and strife. He set up a group of experts in a lonely place so that all the accumulated knowledge of humans is not lost. In Foundation and Empire the situation becomes worse and a traders foundation come to be a major threat to the empire. Finally in Second Foundation The original series comes to an end. In later years Asimov added to the series but as I’ve never read them, I can’t really make any comment.

Space Opera at its very best! This is a series of seven novels that take the story of mankind from pre-history to a future where the minds of the Lensmen of the title are linked to a ‘lens’ that is fitted to the wrist. The lens is programed to work with just that person. Two families are involved all through, but they don’t come together until close to the close, where their minds and lenses are needed. But for what for? There are two ‘super-races’, one benevolent and helpful, the Arisians; the other war-like and hate filled, the Eddorians. Both races use their minds to communicate and manipulate others. Their thoughts merge slightly at one point, not for long but enough for the danger to all life to become clear. The Eddorians are unaware they had been listen in to, while the Arisians know full well that they are not able to defeat the Eddorians, so the turn to mankind to be their eventual tool. Just writing this makes me want to read then yet again! 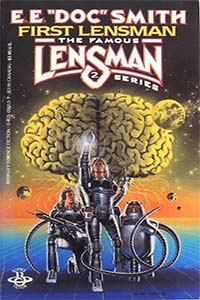 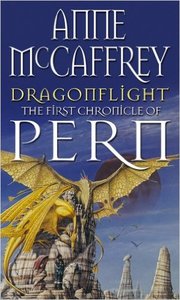 Ah yes, more dragons, however in this case the dragons are not fire breathing monsters looking to grill and eat mankind. Oh no, they are friends and partners with their riders, and can read each other’s thoughts. There is just one active Weir though when we join the story, all the other’s disappeared years ago and no-one knows why. The populace is becoming resentful at the way that dragonriders seem to sit and do little for anyone but themselves. But they have forgotten the Red Star, a star that brings fear and destruction along with it. Then they come to understand why Pern needs the dragonriders.

And so, two stand-alone novels and three series, even if these three writers produced a number of other series, most of which I have read. This leaves out so many other series, like The Perry Rhodan books, written by a large number of different writers and first published in Germany. Last time I looked there were over 2,000 of them. And what of James White and his Hospital Surgeon series? And as I said, I can’t remember all of the books I’ve read.

I’m a writer, although my books are not available right now as CreateSpace, part of Amazon took them off sale after I didn’t bother getting a US tax number. A friend of ours, a retired GP who has penned more than few medical books, said not to bother anyway. Well, I didn’t and now I have to find a new way to publish them.
So then, what started me to off writing? Like so many other folks I’ve always wanted to write a book. Having spent around 12 years studying with the OU, and now retired, I thought I would have the skills and time to write, and I do. What I don’t have is a writing room/area.
Anyway, one day there I was walking through Dorktown (OK, Nuneaton in Warwickshire), town centre. And there across the road were two blokes I knew were wanted for various offences. At that point a copper walked passed them and ignored them.
I was really angry about it. I don’t have a lot of time for coppers at the best of times (and I don’t have a criminal record either, I hasten to add), and seeing that really made me mad. So I took the chance and challenged the copper. He could see I was angry but claimed the guys were not doing anything wrong so he couldn’t touch them, even though there’s a warrant out for them.
I got home and went straight upstairs to the study and began banking out a letter to the County Top Cop. Four hours later I had around 9,000 words of my first novel in front of me and The Mission was on the market but thanks to Amazon, it’s not on sale for now, sadly. But writing that one also brought me to read crime novels and I now read those more than any other genre.