“The nonpareil, the hardboilest of the hard-boiled, one of the darkest and best-loved names in all of noir”

This slim little volume – 154 pages in the edition I read – is a genuine classic of hardboiled fiction and the birth place of one of the iconic figures of modern crime fiction and cinema. A fair number of names have been changed here, though not to protect the innocent, of whom there are few in Richard Stark’s (appropriate name) brilliantly plotted roller-coaster of a novel.

Stark is a pen-name of Donald E Westlake, an extraordinarily prolific and successful writer, largely but not exclusively in crime. This novel was originally published as The Hunter and renamed Point Blank after the huge success of the film version, starring Lee Marvin. Marvin’s lead character was called Walker, a small and rather puzzling change from the original Parker. 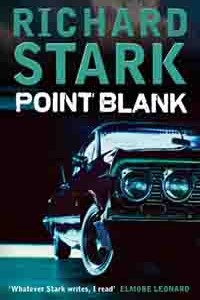 For once it doesn’t hurt to have the picture of a movie star in your head when you read the original novel. Marvin was fantastic casting, Parker could have been written for him: “His hair was brown and dry and dead, blowing around his head like a poor toupee about to fly loose. His face was a chipped chunk of concrete, with eyes of flawed onyx.”

Parker’s a criminal, a freelance heist man, who has a nice routine: an occasional job that pays for a life spent lounging round pools in resort hotels. As Point Blank opens, his routine has been disrupted by a double-crossing associate who needs to buy his way back into the Mafia’s good books, and Parker’s own wife.

Parker wants his money back. That’s about it really. What Parker wants, Parker gets and if you get in the way, well, get out of it if you can.

I like Stark’s writing. It’s spare and efficient, like Parker’s modus operandi. The Mafia – the Outfit, Syndicate, or the Organisation depending on who you are here – is explained as a modern corporation, a theme Stark expands on in The Outfit (of which there’s also an excellent film version).

It’s not all straight forward though, there are tricks played with the timeline. The dialogue’s very well written, and while the prose is efficient, it never feels lifeless.

Parker’s a horrifying creature, leaving a trail of bodies, not really caring who they were. He’s simple, logical and effective. There’s no nuance to Parker’s character, he is completely one-dimensional. That’s usually a problem in a novel, but here it works perfectly. Are we rooting for him? You’d hope not, but…

I need to read more of the Parker books, there are 23 or 16 depending on which Wikipedia page you believe. It’s a very particular style of crime writing that may not be for everyone, but if you like a simple story told at breakneck speed you should love it.