Rick Riordan - Magnus Chase and the Sword of Summer

Magnus Chase and the Gods of Asgard, book 1

“With an epic plot, engaging (and diverse) characters, and tons of wisecracking humor, Riordan’s latest is a page-turner.”

When reading Rick Riordan’s latest I had the extraordinary sensation of déjà vu since I had just finished Rushdie’s Two Year’s Eight Months and Twenty Eight Nights.

The explosions of the fire god and the bombings throughout Boston were fairly similar to Rushdie’s invasion of evil jinns.

So too were the parallel worlds with slits between the dimensions which could open up and allow demi gods, immortals and favoured mortals to slip through. Not that Magnus Chase and the Sword of Summer has any pretentions to being a piece of magical realism of the Rushdie pedigree, though magical it has to be with a dose of realism thrown in to ground children into belief. Perhaps the difference between the worlds of literary fantasy and children’s fantasy are not that far apart after all. 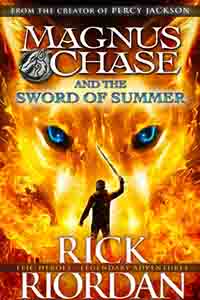 Rick Riordan’s Magnus Chase continues his trend of bringing myths to life in the modern world through very modern teens and juxtaposing American cities with mythological heavens. In this case Magnus the homeless who turns out to be the son of the Scandinavian god Frey and an American mother who gave her life to save her son. Magnus dies battling the fire demon with a rusty sword that he cannot use and that’s when his adventures really begin. He escapes from Valhalla accompanied by a failed Valkyrie and two dwarfs and sets out to prevent the destruction of the gods in the Scandinavian apocalypse, Ragnarok while the Valkyries of Valhalla are after him thinking that he is the villain of the piece, out to aid and abet the forces of evil.

Riordan turns his fantasy into a fast paced thriller with chases and supernatural villains galore, not to mention talking swords who insist on being called Jack and goats and he has certainly succeeded in interesting a new generation of children in the old myths much in the same way as JK Rowling transfers a world of magic to an English public school.

He also throws in some tongue in cheek pieces of wit as for example turning Odin into a new age motivational speaker who explores the magic of smart phones and power point presentations as his foray into a new 21st century Midgard peopled by scientific human beings who however have no magic at their disposal. Come to think of it – that’s a kind of Rushdie touch too, magical realism which frequents the child’s world.

The stream of jinia and the good and the bad approximate to the devils and demi gods of Riordan’s myths. But then, one counts as literary fiction and one as young adult entertainment. So perhaps one shouldn’t really mix the two worlds!