“Another triumph . . . Its darkness is mitigated by its sparkling protagonists.”

After thoroughly enjoying both The Cuckoo’s Calling and the Silkworm, I’ve been eagerly awaiting the release of Galbraith’s third novel Career of Evil. We all now know that J. K. Rowling writes under a pseudonym for this crime series and I can only say her sensational writing style shines through!

I don’t mind admitting I’ve developed a bit of a crush on Cormoran Strike and Career of Evil did nothing at all to quell either my crush, or my love for the series. From the very first chapter this is an unputdownable novel, drawing you through from chapter to chapter in total suspense.

As we head into the third book we now have enough back story to explore it a little and that’s exactly the direction this novel goes into with a murder case that may well be tied to Strike’s past. Is he tying in connections that just aren’t there, or will his hunches amount to the finger pointing in the right place? 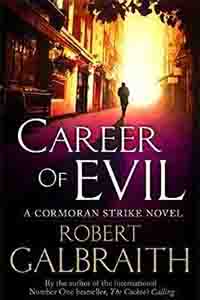 I won’t spoil it for you, but as usual Rowling has produced a twisty-turny mystery with several key suspects that is guaranteed to keep you guessing until the end! I have to confess my suspicions were way off on this one and I tore through the last 100 pages finding it impossible to put down.

Be warned, Career of Evil is much grittier than the first two of the series and I don’t mind admitting I found it stomach-churning in parts. I don’t want to spoil what’s within, but if you’re not good with blood and guts, bits of severed bone and the like then this may not be a novel you feel comfortable reading.

A brilliant, brilliant novel, my only complaint is how long I now have to wait for book four in the series after tearing through these 500 pages in just a couple of days.