“This is a typical classic Silverberg story, and is thought provoking.”

Silverberg is a bit of an anomaly to me, I seem to either love his books or absolutely detest them.

Prior to discovering Recalled to life there were 4 of his novels that I have read, the first two were brilliant (Tower of Glass & Invaders from Earth) but the next two were among the worst books I have ever read (Dying Inside & Son of Man), with this in mind I decided to give him one more chance and when I came across this book in a second hand shop picked it up. Although not as good as I had hoped it did manage to restore my interest in his works. 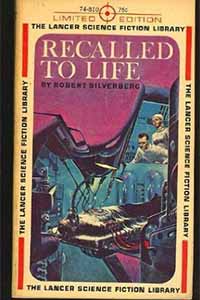 Set in 2033 a group of scientists have discovered a method that allows recently deceased corpses to be brought back to life. This is achieved through a combination of hormone treatment and electrical stimulation, but the success rate becomes lowered the longer after death the process occurs. The novel centres mostly around Harker, an ex state Governor that was forced out of office for trying to introduce his own ideals into the wheels of power. Now a partner in a major law firm he is approached by the medical lab to both front their PR campaign and advise on any legal implications the process may have, seeing this as a risky but lucrative chance to rebuild his career, he accepts. As you would expect there is mass opposition to the procedure from both political and religious groups. Can Harker, armed with nothing more than his own self belief manage to salvage his own reputation and convince the American public that ‘reanimation’ is nothing to be afraid of?

The story at just over 140 pages (although the type was tiny) moved along quickly enough, and you had the feeling that Silverburg really put a lot of thought into the varying degrees of reaction such an announcement might evoke. We encounter the families of the recently deceased begging for them to be brought back to life, expertly contrasted with the other peoples fear that once dead they will be reanimated against their wishes, citing the concern that their souls may be left in limbo. There are more than a few unexpected twists, and after a few dozen pages I really thought I had the ending all sewn up, but thankfully this wasn’t the case. The science seems plausible without going into any mind boggling detail and characters that are very easy to relate to.

I suppose the biggest question poised throughout mankind’s history is ‘What happens to me after I die?’. I really wish that the novel had explored a little more of Silverberg’s ideas of the afterlife. We have a small taster now again, but that really just left me wanting more. It wasn’t until I had read the book that I discovered he actually rewrote much of the novel in the 1970’s (mine was printed in 1962) so maybe this next addition elaborated on these themes.

The book really does leave the reader with a sense of wonder. What does death hold for us? How would we react if there was potential to ‘bring us back’, and what choices would we make? Definitely worth a look whether as an introduction to the author or as someone already familiar with his work. If you do buy the book, I would really advise you not to read the blurb on the back, it gives away a number of the plot twists and it is just ridiculous that it was included in this way.