“It’s an absorbing tale, taking the reader from one far-flung and restive end of the Roman Empire to the other. I found it a satisfying conclusion to the trilogy.”

At long last I’ve finally finish this last book in the series, and yet again Mr Southworth has scored highly with this one. The story line continues on as the warriors sail home and come into contact with a much larger group who claim to be fighting the same enemy. This time that enemy is trying to steal a renown dagger owned by a long dead pharaoh. It is believed that it has magical properties. Any force marching to war with the dagger in their leader’s hands, are invincible, yes, I know, another one. What makes this one different is the way that the writer uses it as the lead element in the novel. 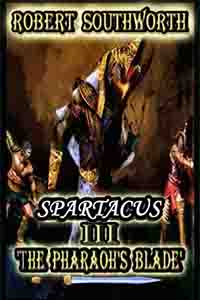 Battles are fought, friends die along with the enemy warriors. A sadistic bully receives his just rewards after being wounded in battle and sent home to recover. Along with all the honour among the enemy forces, treachery lives too, even in close circle of officers around Spartacus and Cassian. After the first battle the army of Spartacus, never large anyway, is badly mauled be still inflicts serious damage on their opponents. Cassian and Spartacus know they are in no fit state to meet their enemy in another face to face battle, so they organise a series of guerrilla tactics that slowly drains their weakened foe. When to two do come to a full on battle Spartacus wins a decisive victory.

After the battle Cassian takes revenge on one of old friends who was implemented in the killing of his father. Once that is sorted the victors make their way and actually see the famed dagger and are disappointed by it. One of their number however decides he should have it, and just for the fun of it, kidnaps the wife of one his fellow officers. Once that little piece of nastiness is sorted, Spartacus, Cassian and many others from the group who began their adventures travel to lands given to them in payment of their efforts, and live in peace for 10 years.

A visitor approaches Spartacus and asks for help, his friends join him for one last battle that they also win but only advised on tactics. Cassian finally gets to face the man who has been responsible for all his troubles before he and his friends can finally retire in peace.

Overall, this is an excellent series of books and I would heartily recommend them to everyone. I said in review of the first one that I had little knowledge about those time history, nor had a read many novels covering the period. Thanks to Robert Southworth I now have another genre to read.