Ruskin Bond - Coming Round the Mountain

In The Year of Independence

“Vivid illustrations make the story even more attractive for children – though boys are likely to take to it more.”

This is the second part of Ruskin Bond’s memoirs for children and deals with his school days and a rather important period in India’s currently history, Independence and the Partition that followed. Bond’s school is Bishop Cotton in Simla and he tells the story of himself and his four friends, the attempt to escape the Headmaster’s cane by stuffing books into their pants and the failure of that attempt.

It reads like an enjoyable school story with football matches, tuck shops and teachers like Dundas Hawke. However the run up to Independence touches Bond’s days – his father is no more and because his mother has married an Indian, he will have to remain in India. 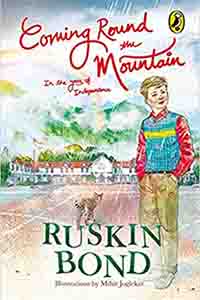 It also touches Afghar, one of Bond’s four close friends who comes from the North West Frontier and who has to leave Simla when the sub continent is divided.

Independence Day itself is almost a non event with the boys stumbling over the Hindi of the national anthem and being treated to Indian sweets by the staff. The division that follows with the boys being herded out to army trucks at dead of night and taken to the border in the hope that they will avoid the violence that is breaking out, is more gripping and far grimmer.

Bond never sees Afghar again and other boys from the school leave for New Zealand and Australia. He is the one left behind to cope with more school days and possibly a new school when he moves to his mother’s home. He takes his title from one of the songs that the boys sing though the inference is that the Partition of the sub continent is that mountain.

Vivid illustrations make the story even more attractive for children – though boys are likely to take to it more.