“Edited by Ruskin Bond, India’s most-loved writer and acclaimed novelist Namita Gokhale, this anthology spans the entire range, from the foothills to the highest peaks and from its easternmost to its westernmost ends. Himalaya will keep you riveted.”

This anthology has a heft in the hand, rather like a pickaxe, though that might be wishful thinking since I am not about to strap on crampons and scale the heights of Everest.

Ruskin Bond and Namita Gokhale have co-edited this anthology of pieces on the Himalayas that spans the range of emotions evoked by India’s mystical mountain range – a strand of Shiva’s hair flung down on the earth, someone said. 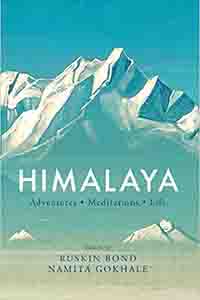 The fact that the Himalayas form such a great sweep down India’s borders from the north to the northeast is made evident through the setting of some of the pieces. So too is the fact that the mountains have their ugly side. Presumably it is this combination of beauty and ugliness that makes the mountains so inescapable. All the 44 pieces have something to contribute to our knowledge of the Himalayas – .

There is Mark Twain’s tongue in cheek account of his trip to Darjeeling – with some tiger hunting thrown in for good measure and a blanket wrapped viewing of the Kanchenjunga – Twain was reluctant to make the pony ride to Tiger Hill at daybreak and preferred to sit for two hours at his window. The notoriously evil Aleister Crowley makes an appearance and turns out to be surprisingly normal where being a bara sahib is concerned, though his accounts of leeches are unsurprising to Indian travellers. You can climb with Hillary and Tenzing to the heights of Everest and perhaps compare Hillary’s camaraderie with his sherpas with Mallory’s contemptuous references to coolies who were always lazy and falling ill. You can also follow in the footsteps of various spies embarking on the Great Game and covering their tracks while describing their encounters with deadly dacoits and weather.

Mountains have always been a source of spiritual awe from the Vedas to the Psalms and the gods have always lived in the Himalayas in folklore. The snows stand for some kind of maya and the north is where the spirit goes to rest. This is why Meditations is the collective applied to the second section. Peter Mathiesson’s mystic wanderings in the snows after the elusive snow leopard comes as no surprise – what is unusual is Tagore’s essay on a trip to Dalhousie made with his father who allowed him the freedom to wander in pursuit of his thoughts.

Ruskin Bond could never escape their spell and dreamt of them during his lonely days in London. Swami Vivekananda encounters a tiger that watches him meditate, then walks away, leaving the Swami to believe that his wanderings were under the protection of his guru.

The section on Life has an extract from Mountain Echoes, the spoken narratives of four Kumaoni women that were written down, the erstwhile Queen of Bhutan’s account of her ride on horseback down from the hills towards Kalimpong, where she was going to school and Ruskin Bond returns with a description of life in a village in Garhwal. Ground realities of a different sort come in with Amitav Ghosh’s discussion on the Kashmir troubles and the dizzying war on the Siachen Glacier – to add its own note of danger that began with self-sought difficulties on the slopes of Everest. In the case of Kashmir, of course, it is not an adventure but the hard facts of political manoeuvring, another dimension of the death that the Lord of Kailash brings with his dance.

Readers will have encountered many of these pieces before in the books they come from but are bound to welcome them again in this themed volume.