“Russell Banks, as cinematographer, is known to move in close.  Foregone focuses his sharp eye on the feints and fictions amid life’s ‘facts,’ as he reveals his fascinatingly fallible character, Fife, whose personal life has been contextualized by history.  As we zig-zag through the character’s past and present, it becomes apparent that the writer is simultaneously, and subtly, demonstrating the act of writing fiction.  Fife is aptly named; he’s an instrument piercing the soundtrack we call life, as the drummer marches on.”

This novel is the story of Leonard Fife, a man who escaped to Canada to avoid military service during the Vietnam war. He ends up becoming a famous documentarian. Now he is dying of cancer, and at the end of his life he has agreed to a filmed interview which is supposed to center around his work. He is being filmed at home, which is his hospice center, in the presence of his current wife Emma. 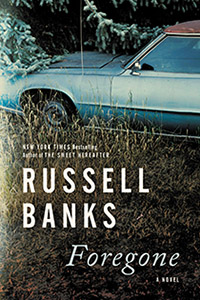 The interview becomes a rambling retelling of his adult life, and he wants his wife present at all the interviews because he wishes her to know the truth about his life before he met her. The filming crew which consists of former students is trying to get the entire interview in before Leonard dies, while his family is trying to prevent his death being caught on film.
Leonard’s story is very interesting and will hold the readers interest throughout the story.

Very heartfelt in many ways, the book captures all the individuals motives behind what is happening and really captures the moments of Fife’s real desire to come clean to himself and his wife about his past.
Reccomended.