“Few writers blend mystery and the supernatural as well as Sarah Pinborough, but there are none who do it better.”

You may think you have read everything that could be said about the Ripper killings, but Sarah Pinborough presents a chilling tale of murder that stalks the streets of Victorian Era London simultaneously and with greater brutality. London police are baffled, is there one murderer responsible for all of the Whitechapel killings? Or is there a more horrifying possibility; are there two killers?

Scotland Yard detectives see an appalling number of torsos stacking up, and though they are in no way similar to the more widely known Ripper murders, they dare not believe they have more than one monster on their hands. Little do they know that the term monster may be apt, and many mutilated corpses will be found before they solve the mystery. 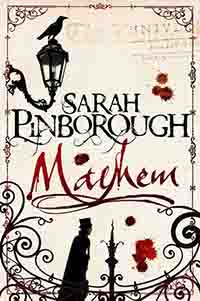 Highly regarded police surgeon Dr. Thomas Bond is called in to help solve the mystery of the carefully wrapped victim’s remains. Bond is fighting his own demons, however, and fallen deeply into opium addiction. Can he trust his own eyes, and follow the clues he uncovers, or is he only chasing visions inspired by his drug befuddled; sleep deprived mind?

Pinborough has created a compulsive page turner featuring one of the most famous crimes in Western history, while morphing the traditional historic account into a paranormal thriller.