“A witty, melancholic and affecting story about a family that struggles with the curse of knowing their own failings. Sophomores is a smart and beautiful novel about growing up and getting through that readers will savor.”

Just finished Sophmores by Sean Desmond.
This is the story of an Irish-American family living in Texas. The family consists of Pat Malone, the Dad, who works as an actuary for a major airline. He is suffering from the early onset of MLS, and to add to that problem, he is a heavy drinker.
Ann, the mother, is a deeply religious Roman Catholic , stay at home wife who is about to be called for jury duty for a major crime involving a local minister, and Dan, a very bright sophomore student in high school, who is in the advanced literature class and someday wants to be a writer. 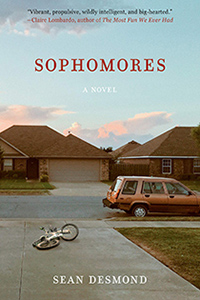 The main focal points to the novel are the family’s handling of Pats problems due to his condition and all that brings to the family circle, Ann being caught up in the trial and Dans coming of age incidents, which are basically the norm for a boy his age.
The writer tells a good story, always holding your interest, and the story moves along at a good pace.
This is a quick read even at 372 pages.
Recommended.