“A thrilling high-concept book that crosses numerous genres. Chilling and emotional in all the right places.”

This book is a bit of a mixed bag. the premise is brilliant, people who can ‘Revive’ the dead briefly and talk to them, offer their relatives the chance of a final goodbye, discover a murder victim’s killer, the possibilities are endless.

It’s a brilliant plot and is reasonably well written if a little awkward in places. The protagonist is a 30 something American who sounds strangely English most of the time, his best friend Never Geary is almost too good to be true and the supporting characters are a little clichéd. But if you can get past all that it’s well worth a read.

Jonah is a Reviver, one of the best, he can bring back the most difficult of cases that the FRS (Forensic Revival Service) deal with and is proud of his ability to treat the dead gently and with compassion. 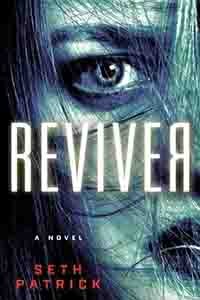 Then comes Alice Decker, a murder victim, nothing unusual except.. She sees something, she’s terrified and nothing Jonah can say will calm her, so he cuts short the questioning and lets her go but not before a strange and malicious voice comes from her animated corpse…… We see you….

Jonah is unnerved, left with the unsettling feeling of being watched, his next revival, a murdered little girl goes well, no evil manifestations, all is good, she’s clear and helpful and after saying goodbye to her parents leaves, content. As he walks away from the girl’s home, he’s suddenly seized with an inexplicable rage, aimed at a man in trainers he recognises. You he screams, grabbing the man, you killed me! And then passes out.

So did little Nikki stay with Jonah? Is Jonah just overworked and missed a subtle something Nikki had shown him during her revival? Has Jonah accidentally opened up a conduit?

When Jonah is called upon to revive Daniel Harker, the man who discovered the very first Reviver, who championed the cause and who brought Reviving into the public eye and the man who was kidnapped and left to die of thirst he finally has to admit to himself that this is not overwork, Daniel has stayed behind, a ghost trace and he’s just as determined to find out why he was left to die.

The story unfolds to reveal two groups, the Afterlifers, a predominantly religious group who say that reviving the dead is an abomination, and Michael Andreas the financier of Baseline, a now defunct private firm who first experimented with reviving. But who are the baddies?

The plot thickens, who is in the wrong? Who right? What is trying to come through? Good or evil?

If you like a little bit of the supernatural, an easy reading thriller that doesn’t stop to breathe and you’re not too worried about the finer details, you’ll enjoy this.

It’s apparently a planned trilogy and I’ll definitely look out for book two.