Shokdung - The Division of Heaven and Earth

“Taygal’s book, published illegally in Tibet in 2010, is a poetic, painstakingly written indictment of Chinese rule and a call for a ‘peaceful revolution’ against what he describes as Beijing’s heavy-handed governing style.”

Tibet that hidden land high in the mountains which everyone hopes to visit but very few dare to. A land which was annexed by Mao Zedong’s forces in the 1950s and signed over by those who were the guardians of Tibet’s spiritual ruler the Dalai Lama, then a 15 year old boy. The Dalai Lama was forced to abandon the Potala Palace for India while Tibet was overrun and monasteries and their custodians destroyed. 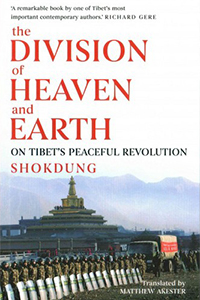 This was a low in the history of Tibet. Where Tibetan warriors had once made the Chinese shiver in medieval times, now it was the iron fist of the Chinese in control cutting off all hopes of escape or salvation. So wrote Tagya, the Tibetan writer who has taken Shokdung, or ‘clarion call’, as his pen name. Because Tragya’s voice was so lucid and penetrating, the Chinese banned The Division of Heaven and Earth when it was first published in Tibetan after 2008.

2008 was a violent year – there were uprisings in Tibet and thousands marched demanding the return of the Dalai Lama. Shokdung watched the mayhem unfold from the state run publishing firm where he worked and decided that he could no longer side with his employers. Journalists were expelled, there was a media blackout and while the Chinese attempted to win Shokdung over, the writer came to certain conclusions about the situation unfolding in Tibet.

Now this vital book has been translated into English and the reasons for the ban are clear to the wider audience of historians and political students. Shokdung indicts China’s Tibetan policy.

His theory was that the Tibetans lacked a strategic philosophy to combat the Chinese. Turning to the history of the region for a solution, he reasoned that Gandhian principles would be best suited to the Tibetan condition. Stay true he implied to the Buddha’s teachings and fight violence with non-violence. Shokdung writes as Buddhist commentators have always written, analytically, drawing on Tibetan tradition as he talks about the peaceful revolution which will enable the Tibetans to be self reliant and combat the Chinese without calling on external help. He does, to be fair, also glance at Western philosophy before settling for satyagraha.

The question is whether Gandhian tactics would work against the Chinese. There is no real answer to this – though George Orwell once famously commented that while the British Empire could be amenable to non violence, a communist state like the Soviets would never consider it. Orwell’s theory can possibly be applied to Maoist China. Shokdung wrote that the British rulers of India had some vestiges of conscience – George V invited the ‘naked fakir’ to tea. The Dalai Lama on the other hand was forced to flee in disguise and the Chinese were alarmed enough by The Division of Heaven and Earth to throw Shokdung into jail for six months in 2010 because they regarded his work as an act of betrayal from someone who had previously gone along with them.

Currently the Tibetan cause seems to be under wraps. World opinion, barring entertaining the Dalai Lama has said little or nothing on the subject, despite some 140 self-immolations by monks. Perhaps there are greater causes to tackle, perhaps not. Tibet remains isolated with a Chinese railway that travels up to Lhasa for the benefit of tourists.

All the reader has to set against this is Shokdung’s clear, analytical treatise. Whether the Gandhian philosophy has any merit can only be decided by history. However his book controversial or otherwise, his book remains one of the most important to come out of Tibet at the current time.