Five-and-Twenty tales of Vikram and the Vetal

“The tales have kept people of all ages enthralled since the days that they were first told with their themes of glory, romance and honour.”

VIkram and the Vetal is an age old king and vampire story with echoes of Oedipus and the Sphinx. The tales have kept people of all ages enthralled since the days that they were first told with their themes of glory, romance and honour. The fact that it was the legendary king Vikramaditya who was in the mesh of the Vetal added to their fascination.

Each story demanded a solution to the riddle posed at the cost of the king’s life – your head will shatter into smithereens was the Vetal’s repeated threat which recurs like a refrain. 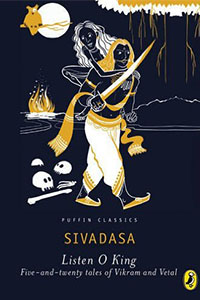 Deepa Agarwal has chosen to retell the stories basing her text on Sivadasa’s version rather than on any of the other versions like Somadeva’s, though she does include a couple of stories from Jambhaladatta. This is because SIvadasa concentrates more on telling the story than drawing moral conclusions and keeps his tales short and sweet – something that would appeal to the 21st century child who is likely to be put off by lecturing.

The attempt to bring classical stories once intended for adults to a children’s frame of reference is interesting – much like what has happened in the case of the Arabian Nights where the fantasy element overtakes the adult content. Vikram and the Vetal is very much on the same plain as the Arabian Nights with their mix of willful women, loyal servants and heroes who will do anything in the cause of love, even travel to the realm of the dead.

Sivadasa adds a story which was not there in the original Vikram and Vetal series which establishes the links between King Vikram, the Vetal and the ascetic Kshantishila and gives the action a believable context. There is also humorous social commentary and observation which still manages to evoke a reaction.

Agarwal has padded out gaps in the stories and added dialogue which she feels would provoke a child’s interest and reduced the amount of poetry in Sivadasa’s original restricting it to where necessary. As a retelling it is creditable – especially since the TV series wound up a long time ago.