An Indian Summer at Wimbledon

“This novel gives you hope and makes you want to believe that perhaps, someday, the future will see an Indian making a mark on the Centre Court.”

Centre Court is a story of Shankar Mahadevan, who is in his mid-twenties. His love for tennis begins at the delicate age of 5, when he receives a tennis racket as a birthday gift.

Currently ranked no. 41, the story begins with him at the end of his tether, having being out of the scene for a while, owing to a knee-injury.

Despite a hostile press and, the corrupt and slow Indian tennis association, he arrives at the Wimbledon having made up his mind that this will be his last attempt to make an impression on the larger tennis world. 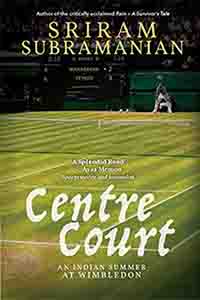 He’s accompanied by his father, Ananth Mahadevan (who is sort of his self-appointed manager) and his coach, Milind. And, so begins his Wimbledon journey – which the father believes he can and should win. The story goes backward and forward from the inception of Shankar’s career, his love for the game, his journey so far and of course, the tournament as it unfolds.

The pace remains riveting, dwelling upon the highs of Shankar’s victories to the lows of his personal struggles. As he faces opponents from around the world and of varying levels of ability and playing styles, we get a glimpse into his mind. As he starts winning one match after the another, and the media frenzy reaches a peak, we start hoping and believing in his abilities.
Can he do the unthinkable and turn the tables of fate?

The novel is realistic. And captures the true essence of the game. Every character is well-defined, with motivations and personalities, flaws and merits.

Gives a brilliant insight into the world of tennis and Wimbledon – the dreams and aspirations of players, their quirks, their successes and failures and eventually the trophy that matters.

There is an alternative viewpoint: that of his father, Pa. Calm and quiet, having walked beside him at every step of his 20-year journey, Pa is the epitome of patience and perseverance. The struggle of being a parent to a sportsperson and the associated decisions that need to be taken along with it, the sacrifices and just raw insight into the mind of a father, has been captured very beautifully, and was one of the highlights of the book for me.

This novel gives you hope and makes you want to believe that perhaps, someday, the future will see an Indian making a mark on the Centre Court.