“This book is dedicated to every student who has gazed through a window and wished that she or he could escape outdoors instead of being trapped inside a classroom.”

A lost world shrouded in mists where animals and birds live in happiness and where humans are invisible even as they walk among them.

Kamla, Pradeep and Manohar fall out of an oak tree into this world, a kind of parallel universe to the one they inhabit around Mussoorie.

There they stumble into the modern day version of Linnaeus, very appropriately a Bengali professor who has been lost in this secret sanctuary for three years and who goes around spouting the Latin names of the local flora and fauna. 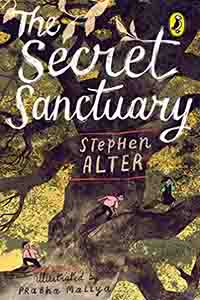 Linnaeus Mukherjee teaches the three children how to survive in this idyllic world they have stumbled upon and shows them how animals live peacefully with each other unless they are hungry – in which case a leopard may jump on a gharal. Alter uses the story to guide children gently through the wonders of the mountain world in which he lives and opens them up to the natural order of things – sharing a cave with a Himalayan bear for example, while remaining invisible, or teasing a langur with a nut.

Like all magical worlds, the secret sanctuary too has its own time and space which is different from the rules of the real world – handy when it comes to children who have families and schools to worry about. Alter seems to identify most with Linnaeus Mukherjee, a man who has lost his wife, whose children are grown up and have their own families and who abandoned a child’s love for Ferraris for a love for botany that would have impressed the original Linnaeus.

The book is a slim one and the story simple – some children might complain of a proliferation of Latin – but on the whole the story is an enjoyable meander through a secret world accompanied by an intriguing adult who stands in for the parent figure – stepping in to rescue Pradeep when he is lost – without wielding the wand of parental authority.