“May be the clearest introduction to physics ever . . . An utterly engrossing read.”

I admit it, I’m a nerd. This is my thing. I also have to admit that I studied astrophysics at university so my review of this book may be somewhat biased, I can’t really claim I approached it with impartiality or from the view point of the layman. But that’s not going to stop me.

This is the book that arguably pushed Professor Stephen Hawkin into the public eye, it has sold well over ten million copies so far, which is quite a number for a book of science. In fact it is by far the best selling scientific publication in history.

So what’s it about? Well, it’s not an exaggeration to say it’s a book about everything. Literally. Everything. What Professor Hawkin tries to do, and mostly succeeds, in this book is to give an insight into everything we can see, and can’t see, in the universe right from the moment of the big bang. It’s quite an undertaking. 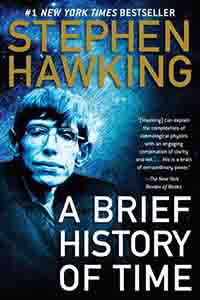 It’s even more impressive how he mostly manages to do this without resorting to complicated scientific explanations and formulas. He caters to the casual reader and largely novice enthusiast. Don’t get me wrong, we’re not treading on simple ground here and in places it does push the reader into areas they normally might not tread, but he does it with a skill that urges you to read on. The mark of a remarkable teacher shows in his writing.

From a informed point of view some of the theories and ideas in this book have been changed or re-thought over the last few years (it was first published in 1988) but this is my nerdiness showing through and doesn’t detract from the vastness of the things written about. From the big bang, to gravity, to black holes , dark matter and all the other things in between that you don’t understand, this book sets out to help you understand.

This book is not one for the casual reader, or a book to just “dip into” now and again, but if you have a little interest in where we all came from, what is out there as you stare up at the night sky, or maybe just want to set out to learn a bit more of our place in this universe then this is a fantastic starting point. Go on, get your nerd out.