“If you’re a fan of comedy in general then I think this is a book you can certainly get into and it’s a great way to be introduced to the world of Toast.”

Created by comedian/actor/writer Matt Berry, Steven Toast is the titular character in channel 4’s comedy show Toast of London, which follows the RADA trained thespian as he tries to get out of the rut his acting career is currently in. In the style of shows such as The IT Crowd, The Mighty Boosh, and Flight of the Conchords, Toast of London has struck a chord with comedy fans across Britain and is currently on its third season.

As Steven Toast, Berry has now published a memoir which details his life from a student at RADA (where a fellow pupil ‘disappeared’ for criticising Shakespeare), to his acting career which he insists is going from strength to strength. If you’re already a fan of the TV show, then you are bound to enjoy Toast’s book. Following in the surreal style of its on screen counterpart, the book is every bit as enjoyable and Toast’s early life is as humorous as his current acting career. 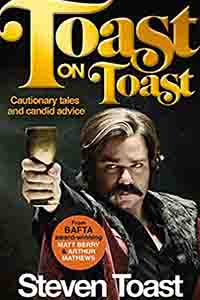 Those of you who haven’t seen the show may be more hesitant. If you’re a fan of comedy in general then I think this is a book you can certainly get into and it’s a great way to be introduced to the world of Toast. You don’t need to have seen the show to follow what’s going on in the book. Despite being completely unaware of the absurdity of his career, Toast genuinely believes himself to be a master of his craft and often berates other (better) actors for poor performances they’ve turned out over the years. He is also on personal terms with many other esteemed actors and even affectionately refers to Anthony Hopkins as ‘Hoppy’.

Toast’s book also includes advice for young actors out there hoping to make a name for themselves in the industry. The most important one is: Be good at acting! Sound advice. Toast often finds himself going on tangents and at one point even reveals his idea to scrap the NHS in order to put more funds towards theatre productions. He also reveals some juicy behind the scenes titbits, including the fact that Bruce Forsyth was nearly the lead in Schindler’s List.

This may come across as heresy to those of you who love to read physical books (as do I), but I strongly suggest that, if you’re thinking of buying this book, get the audiobook version. Not only is Matt Berry’s deep, rich voice honey to your ears but he also reads the book as Toast and it’s incredibly funny to hear him speak in the overly dramatic way Toast does. Simply hearing the way he over pronounces certain words had me cracking up and I was laughing out loud at the bits where he gets genuinely furious at certain critics, including one who writes a review simply calling him a cunt.

It’s also worth noting that Berry makes it sound as though Toast is drinking during the recording. You’ll occasionally hear him burp and at some points it’s clear that Toast is completely sloshed. Berry’s reading of the book really is a performance in itself and is great to listen to at the gym or on your commute. I must warn you, you may get strange looks from strangers when you find yourself stifling a laugh.

If you’re unsure as to whether Toast on Toast is for you, then you can always watch a couple of episodes of Toast of London on 40D. If you like what you see then you should absolutely check out Toast’s book. It is also essential reading if you’re a struggling actor hoping to make it big and it’s full of excellent (terrible) advice.