“The Twelve is the best first novel I’ve read in years. It crackles. It grabs you by the throat. This is some guy to watch out for in a dark alley.”

Someone once said, ‘One man’s terrorist is another man’s freedom fighter’. I suppose there could be something in that but of course, it all depends on your own individual situation and experience. In my case it’s having spent 12 years in the British Army and serving two tours in Northern Ireland. Those two four month tours gave me a different view point on The Troubles, as they were called.

The Twelve is the story of a haunted IRA hit-man, Gerry Fegan who while serving time in the Maze prison became haunted by the ghosts of his victims. Each one wanted vengeance on the person who ordered, or stood back and did nothing when they could have prevented the deaths. It’s an interesting story line in its own right, although I personally wouldn’t have sympathy for Fegan, who if real would have been nothing but a vicious, sadistic thug who enjoyed killing for its own sake. 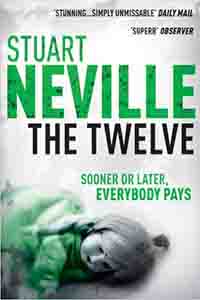 His victims are a mixed bag of men, women and children, some are targeted, some are caught up in the violence by chance. There’s the three soldiers blown up by a bomb on the Shankil Road, but still alive and could have been saved if a priest had insisted on giving them the last rights, but who walks away as Fegan finishes them with a nine mm bullet each. In The same bombing, there’s the mother and her baby in arms, who both died instantly in the explosion, along with shop owner. There’s the two UFF thugs who were tortured and killed on the orders of a minor, but ambitious leader because of the falsehoods of an Intelligence Service plant who had worked his way right into the organisation.

As the body count of revenge rises both the Intelligence Service and the minor leader become more and more desperate to kill Fegan. In the meantime he has sworn to protect a Catholic woman and her daughter who committed the crime of loving a RUC constable. At the very top of the tree is an elderly but strong man who gave, and still gives the orders to the lesser mortals of Republicanism in Ulster.

This book attempts to show a different side to The Troubles, the mental scars on the killers and the hypocrisy of the whole of the IRA/Sein Fein set up. Or is that my own pre-judgement showing through here. Of one thing I am sure of, there is no glory in any of it, for any of the characters.

Overall it’s a decent read and even more so when you know it is Neville’s first novel. Again, it’s in an easy voice to read, which I like. Because of the subject matter there is quite a lot violence within the story. If you haven’t read it, give it a go, even though it is now six years old. Perhaps that’s why it was in the same three for a fiver offer in the Works. Okay, I may not actually have any sympathy for Fegan, but I did enjoy it overall, well worth looking for.