“From the celebrated author of the international bestseller The Secret Life of Bees comes an extraordinary novel about two exceptional women.“

Sometimes books act as eye-openers, as teachers of life lessons and as strongest pillars of support during times of distress. The Invention of Wings did all this for me, and much more. Here is a story of two girls and how their lives unfold with the passage of time, a story that has been greatly influenced by real life events. I found so many layers to this novel and each had its own significance in my very own life. Maybe, because of this emotional connect, I loved this book to a great extent and can go as far as to say that: this is one of the best works of literary fictions I have come across since To Kill a Mocking Bird. 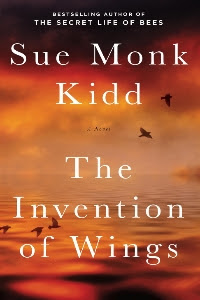 The lives of Sarah Grimke and her slave Handful and the lives of their respective younger sisters are filled with adventures. They are ordinary lives, which we see around us. What made them special, was despite grave adversities and life threatening road-blocks, they “invented their wings, not so much in spite of these things, but because of them”.

This book not only talks about slavery but paints vivid images for us to understand what went on during those dark times. One such example is the line: ”I saw the cowhide split her back and the blood-flowers open and die on her skin”. Since, I had recently watched 12 Years a Slave, I could visualize the whippings meted out to young Patsy in the movie.

The Invention of Wings is rich in its portrayal of history. What I liked best about this aspect was, at the end of the book, the author had given all the true incidents that inspired her to craft her own narrative. She had even gone further to explain the extent to which she had deviated from reality. I believe that calls for really hard work and thorough research. I really appreciated the explanations.

The Invention of Wings not only touches upon the subject of slavery, it goes on further to delineate the status of women, their fight for empowerment and justice and it made me reflect how relevant these issues are even to this day.

Who should read the book?

In other words, I would recommend this book to any book lover in any corner of the world. This piece of historical fiction is a proof of sheer literary brilliance and has the power to change our minds for the better.