“Mukherjee tells an energetic tale and manages with her knowledge of the profession – she was Kitty in the TV series Karamchand – to bring her characters to life.”

This is a novel that brings together the candy coloured world of Bollywood with life in four very different cities — Delhi, Mumbai, Kolkata and Benares.  It also juxtaposes an ordinary middle-class family, with, predictably the underworld of drugs and sex that trails the on the edge world of acting and performance/.

Mee And Juhibaby is the story of Mee and her mother, Juhibaby, who comes from a jatra background, born to parents who circled the rural circuit with their troupes and who didn’t want a child.  Juhibaby, who is ravishing, is married off at 16 into a middle class family that lives in Delhi, far from rural Bengal and the colourful, tawdry jatra stages. There she, in turn bears a daughter, Mee. 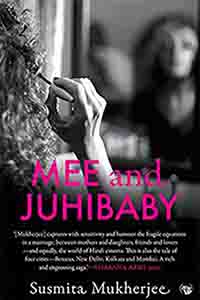 Mee’s upbringing is very different from her mother’s – she is brought up in a staid middle-class home and goes to convent school. However, as luck would have it, good or bad,  Mee is instinctively drawn to acting as a result of her mother’s genes.  A middle class and covent education spell a career in Bollywood rather than rural jatras but the course of Mee’s acting career is far from smooth. Life intrudes whenever she has plans. Her marriage fails and then she is harshly rejected by a movie mogul. This sends  Mee spiralling into the expected vortex of alcohol and sleeping around and she struggles her way out to make a life as a TV serial writer.

Ultimately the book is about relationships, primarily that between mother and daughter, but also between husband and wife, friends and lovers.  Mukherjee tells an energetic tale and manages with her knowledge of the profession – she was Kitty in the TV series Karamchand – to bring her characters to life.  Perhaps one could have asked for less widely differing backgrounds.

In the end it comes down to a tale of forgiveness and homecoming. Mee triumphs over the lows in her career and returns to rescue her ailing mother in the nick of time from an old age home – ending the book on a positive note with divides between mother and daughter healed.