“Jordy Diago is to be complimented for his achievements; I certainly hope to see more from him.”

Sven Hassel was very popular during the 1970’s and 80’s: allegedly a veteran of an elite Panzer Regiment, allegedly serving in almost every theatre in the Second World War, he wrote a series of lurid and slightly trashy war stories covering his exploits.

The word ‘allegedly’ is used advisedly here – there is much debate as to how autobiographical his novels actually were, with the consensus tending towards ‘not at all’. It is rumoured that he spent his war in Copenhagen (he was a Dane) stealing bicycles and informing for the local Nazi party and that his wife wrote most of the books he took credit for. 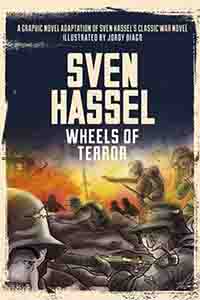 I was first introduced to his works as a callow teen, in the Rivonia Book Exchange in the well to do suburbs of Johannesburg. I can still recall the frisson of anticipation and discovery that the Rivonia elicited as I sorted through the huge piles of musty-smelling, second-, third- and fourth-hand paperbacks looking for a Hassel that I hadn’t yet read. It’s fair to say that, as a young teenager, these were the first grown-up books that I had read and they thrilled me beyond anything that the Hardy Boys or Famous Five could manage. So, I look back on his books with some fondness and the idea that one of them (the second in the series) has been made into a graphic novel is rather exciting.

Unlike some of the other reviewers, I rather like Diageo’s gothic, stylised illustrations. Dark and dirty, sparing with colour, they have a very appropriate look, in my opinion: part steampunk, part All Quiet on the Western Front. OK, so you won’t find a perfectly rendered Tiger tank, but the artist’s depictions of the series’ characters, such as Porta, The Old ‘Un, Pluto and The Legionnaire, all fit nicely with my half remembered imaginings. Sadly, though, the artwork is let down by the translation from the original Danish and is nowhere near as competent or fluent as Tim Bowie’s treatment in the original paperbacks. It’s readable, but irritating.

Even worse, the editing from a full length novel to an abridged comic format is very poor, resulting in a series of truncated, disconnected scenes and chapters. Even the ending itself seems to arrive unannounced and I was left wondering whether my copy was missing the last few chapters or perhaps there was a Part 2 to look out for. This does mean that all but the most dedicated Hassel fans will be left wondering whether their money (and this is a lot of money for something of this quality) was wisely spent.