“Clear, emotionally telling and always right to the point, her accounts of the other forms of life are without peer.”

Last week in office one of my art directors came running to say that his holiday cook had been snatched by a tiger from a boat in the Sunderbans – the man he said sadly had become careless. There were no reports in the paper – Forest Department officials say that tiger incidents are less and try to play down the fact that tigers in the Sunderbans have been recorded as man-eaters since at least the sixteenth century. No one knows why, though tiger experts agree that this is not usual tiger behaviour. This is where Sy Montgomery comes in with her account of the relationship between the people of the Sunderbans and the tigers that stalk them. 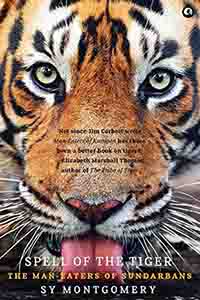 The Spell of the Tiger is the story of an American woman’s grappling with the Bengali language and the magic and mystery that shrouds the Sunderbans. Montgomery sees it as a matter of karma – the people she encounters are fatalistic and it seems to meld with the gnarled roots of the mangroves, the dangerous thorns and the domination of nature. She writes about the behaviour of the tigers as described by Girindra her sareng friend and by various forest officials like Rathin who can speak English. The Sunderbans tigers are intelligent, study humans and choose their hunting times when people are most likely to be in the forest between 7 and 9 in the morning and 3 and 4 in the afternoon.

Montgomery questions what her interlocutors have to say from time to time – for example she wonders why there are so many tiger attacks if the mantras that the honey collectors chant are so powerful. Bonbibi’s priest at Sajnekhali is a tiger attack survivor – he puts it down to the fact that he and his group were cutting wood without proper permits.

There is a recurrent theory that the tiger is there to keep the Sunderbans free of evil. Forest officials are rarely attacked the prey of choice according to popular belief ispeople who have been drinking or polluting the forest in some way. Of course this trend of belief runs across South Asia – the tiger is the mount of various gods and goddesses and has been created to preserve the natural balance, which includes fighting evil doers.

While describing the threatened lives that Sunderbans dwellers lead, Montgomery brings in many of the strange rituals that she has seen and talks about the proliferation of pug marks that appear and disappear. Sunderbans tigers it is rumoured, can fly and the place is haunted not just by ferocious big cats who tailor their hunting times to that of the honey collectors and wood cutters, but also by ghosts who have to be dealt with by the local shamans. Montgomery experienced the sensation of being stalked by a tiger and caught a glimpse of one swimming – people she says find it hard to believe that they can be reduced to just chunks of meat. Pirates with their guns and speedboats, incidentally, escape the fate of being eaten, though most ordinary people confronted by a tiger’s charge are too frozen with fear to pull the triggers of their guns.

The scenery of the Sunderbans, beautiful and bewildering, plays as important a role in her text as the tiger does. It is a kind of mysticism where the ugly is beautiful and the beautiful – like the tiger and its coat of fire – terrifying. Somewhere Montgomery says it is a game of maya, the illusion created by Vishnu who lives beneath the surface of the sea.

It is a very personal account written beautifully by a stranger to the country and at some times typically American in its outlook. Occasionally however, Montgomery’s interpretations of what she saw and heard may be flawed simply because she had to rely on sometimes imperfect translations. The rituals for Dakshin Ray puja for example end she writes with Om Shakti which is an invocation for peace.