“In the end this political biography proves that sometimes the gods are not mocked and that Greek tragedies harsh as they were, had a point.”

Born to be hanged – an old English grandmother’s complaint about the rascal of the family. In Syeda Hameed’s book of course the title is a two edged sword. The whole world knows about the execution of Zulfikar Ali Bhutto and at that point in time it struck a blow at the power structure of Pakistani politics, sending the People’s Party of Pakistan reeling and along the way sowing the seeds for the assassinations of his son and daughter.

Not that Hameed was responsible for the title – her source was Sir Maurice James’ Pakistan Chronicles James was British High Commissioner in Pakistan during the war in 1965 and earned Bhutto’s wrath for various things that he went public with, including the fact that Bhutto hated Hindus and India. 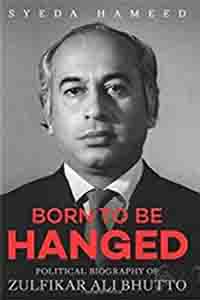 Bhutto held the reins of power in Pakistan for six years between 1971 and 1977. He was then overthrown by General Zia ul Huq who was his Chief of Army Staff. Bhutto’s rise to power was hardly smooth but given the nature of politics in Pakistan, that was unsurprising.

Syeda Hameed spent twenty years researching her subject – she had never met Bhutto. In her ‘political biography’ she transforms him into a figure from Greek tragedy, a larger than life figure doomed by his hubris to that final lonely death, a common criminal’s hanging. Star crossed, if you like, a man who combined intense charm with intense callousness, was a caring husband and father,but who only cared for his own personal gain regardless of the consequences even to those close to him.

His mother, as not many know, was a legendary Hindu courtesan which earned him contempt from many fellow feudals. It was something that ZAB, as Hameed calls him, could not get over and to that could possibly be ascribed his hatred of Hindus.

Despite herself, Hameed cannot help admiring Bhutto. She praises his rant against the monster India at the United Nations, while being intensely aware that Bhutto triggered the 1965 War with his machinations. While she talks of the events behind the Bangladesh War, she glosses over the fact that he was responsible for unleashing the brutality of the Army on East Pakistan and refusing to accept Sheikh Mujibur Rahman’s majority in the Elections. This could possibly be because Hameed is moved by the charisma of someone whom she ranks with Agamemnon and the other tragic Greeks or it could be a reflection of that charm which he could turn on so easily.

However Hameed does devote a chapter to the torture that Bhutto was capable of inflicting on those who went against him, no matter whether they were close to him or not. His police had instructions to use any form of Guantano Bay tactic that they pleased. The fallout of this was the fact that there were no real protests when Bhutto was hanged – by then those who made him a hero had seen through him. However, General Zia took extra care to destroy the execution site so that it could not used as a gathering point for revolt – though that did not prevent nemesis strikingthe Generalin the shape of an exploding plane.

Hameed’s research of the man she never met is impeccable – she delved into archives of letters in Lahore, spent time in Bhutto’s library and spoke to as many of Bhutto’s associates as she could reach during her trips to Pakistan. As testimony to her hard work, the book is dedicated to Bhutto’s oldest living associate who co-founded the Pakistan People’s Party with him.

In the end this political biography proves that sometimes the gods are not mocked and that Greek tragedies harsh as they were, had a point.