“Heartrending….Readers who relish novels based on true events will be both riveted and disturbed by this retelling of one of America’s most famous abduction cases.”

This outstanding story is the fictionalized version of the story of Sally Horner, a young girl from a Camden New Jersey who was tricked into abduction by a convicted pedophile, and held against her will for almost 2 years until finally being saved.

The story, which some say is the basis for the novel Lolita, is an incredible stunning story of how this poor young girl was abused, continually lied to, and a few times even missed being rescued by a mere couple of hours. The basic story is historically accurate, though as the author states in her afterword, it is still a novel, there are some fictionalized characters, and the days to day events are images of her own feelings on how Sally must have existed during those many months. 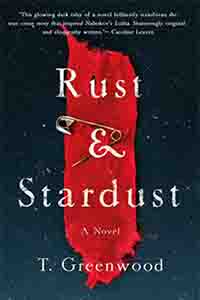 Sally’s tragic story unfolds over 351 pages, but it is is actually a quick read as the longer the story goes, the chapters become shorter. Each chapter follows an individual in the novel.

The portrayal of Sally’s mother Ella, her sister Susan and her husband Al is sympathetically rendered, bringing their grief, frustration and at time loss of hope so vividly that your eyes will tear along with them at many times in this book. The people Sally meets in the book, whether actual persons or not, bring out Sally’s loneliness, fear and at times happiness because of the actions these people will take, some on her behalf.

The last quarter of the book becomes a real page turner as we head towards the final actions to find Sally, and you won’t want to stop reading it until you finally finish it. Like me, you will probably then check out her story on Wikipedia, because even I wondered how many of these events actually happened.