“Sarah’s trials are so riveting, her innocence so absorbing, the book is hard to put down.”

As per the author the characters are fiction in the book. Historical events are not, especially the Vel’d’ hive roundup that happened in July 16, 1942 in Paris, France. The French police went door to door and arrested Jewish families, about 13,000 Jews where taken out of which 4,500 were children. They were taken to Veldrome d’ hiver, a famous indoor stadium where they were held for three days in appalling conditions with no food, water or sanitation and then from there moved to temporary camps like Drancy near Paris. 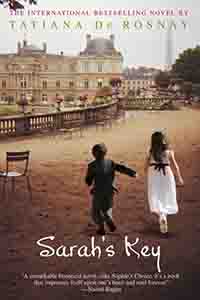 Sarah was a ten year old Jewish girl, her parents and she were one of the families taken by French during the Vel’d’hive roundup. Desperate to save her brother she locks him in a secret cupboard in their Rue de Santonge apartment in Paris. She leaves a bottle of water, his favorite toy, his favorite book and tells him that she will come back for him in a few hours. No one had any implications as to what was going to happen to them including her parents.

60 years later, Julia an American journalist is doing an investigation on the Vel’d’hive roundup and stumbles upon the secrets that links her to Sarah. Julia takes it on herself to find out what happened to Sarah and her brother, if they survived the holocaust?

I have never read about France’s role in World War II and Ved’d’hive roundup before reading Sarah’s keys. It was shocking and terrorizing, especially to read about what happened to those children. The story is not graphic; the author has said it as is in black and white. The fact in itself is horrifying.

I found Julia’s character as a pushover in the beginning. Her husband Bertrand walks all over her. As Julia gets on a quest of finding about Sarah, her character changes over the pages, she gets stronger and stronger. She breaks barriers, takes bold decisions; she becomes a confident person. It is a slow but a steady transition for that character. Julia’s husband, Bertrand is so weak and vain. While Julia’s father-in-law Edouard, he opens up. He supports Sarah in her quest.

The Dufaure family that helped Sarah and Tezac family that moved in to Rue de Santonge apartment after Sarah’s family moved out during the roundup, are the depiction of the French people who saw this happen. They all carried guilt and were ashamed of their country’s history during those dark times.

I could not understand in the beginning why a dark secret have to be revealed, Why talk about something that was so tragic and why not let be. The answer to that question is burden of keeping secret is too heavy to bear. It is better to share even if it is disturbing for a few. By sharing it is acknowledging that this has happened and this could happen again. By remembering the story and telling it to the younger generations we make sure that it never ever happens again.

A heart wrenching novel, if the goal of this novel is “Zakhor. Al Tichkah. Remember. Never forget” then it is accomplished. I will remember, always.

My favorite quote was one of Geneivive Dufaure’s to Sarah and Rachel “Quick, children, come now. You are safe here. You are safe with us.” I wish someone had repeated this over and over again to those 4500 children and kept them safe, to the children who never came back.

President Jacques Chirac’s 1995 address to the nation he acknowledged that France committed that day the irreparable and delivered those it protected to their executioners.

I highly recommend this book, it was a tear jerker, it made me feel sorry that I did not know about this darkest day in human history till this day.