“The characters are well defined – each of the teens doing the killing has a backstory; one can actually notice the transition from a well mannered, well loved child to a killer.”

A small town, with a population of barely 900 people, is hit with a sudden onset of teenage violence. Even supposedly mild mannered teens are killing their families and classmates.

The parasitic invasion has shown a recurring trend through centuries – heavy rains in April, excessive heat in August, and the killings in November. Being a resort town, the locals refuse to shut it down, since their livelihood depends on the tourists coming in. 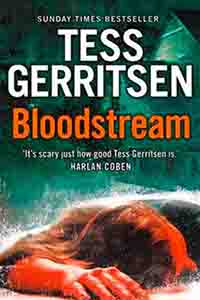 The protagonist, a doctor from another town recently shifted base, has to put forth a medical explanation to a town that believes in witchcraft and evils brought in by outsiders.

This is a standalone novel from Gerritsen (published even before the Rizzoli & Isles series came out). I expected the medical writing to be detailed, the author being a physician herself. However, it seemed quite abrupt in this one, unlike some of her other works where the technical jargon seamlessly blends with the rest of the story.

At many places, the writing felt like Stephen King’s – small town, superstitious inhabitants, out-of-towners held responsible; even the setting is in King’s hometown, Maine.

The premise of the biological phenomena was quite captivating, however. The characters are well defined – each of the teens doing the killing has a backstory; one can actually notice the transition from a well mannered, well loved child to a killer.

Not much of a mystery, and not on par with her other medical thrillers. But if you like science, it’s a good read.