“From dissection table to drawing room, this visit to late eighteenth-century England is chock full of intriguing twists and turns.”

This is the first book I have read of Tessa Harris. It’s a mystery loosely based on history. A specific murder trial in 1781 where the first case of an expert witness was called to testify.

The investigator is not in the police force, not in Scotland yard or even a private investigator. He is Thomas Silkstone an American living in England and his an anatomist.

The time period is not long after the American Revolution, and people have mixed feelings about Americans as only one could imagine. 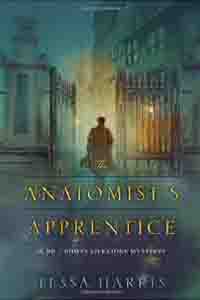 Thomas is called by the sister of of Sir Edward Crick to investigate the murder of her brother – she does not believe he died naturally,even though he was not a well person, and highly suspects her husband. She think he quickened his death so he could get the land ( as back then it was not usual for women to own their own land and being married to her, he could inherit it).

Thomas Silkstone must use the knowledge he has as an anatomist to solve the mystery and decide if her brother died by foul play or not. Its an interesting take on detecting, we don’t have a professional sleuth as our star here, and being interested in forensic science myself, this was interesting to see a different way of solving a crime.