“A vigorous yarn….Clavin writes fluently and often entertainingly of a man shrouded in legend while being all too human.”

This very good biography of Hitchcock separates the truth from the legend. Hitchcock rose to fame on the basis of a magazine article about what is considered to be the first actual one on one gunfight in the West. His fame was spread by dime novels of the time and he was everything he was made out to be.

Tall and slim with long curly hair that reached to his shoulders and a large bushy mustache he was always careful of his appearance. He bathed twice a day, and he wore very fashionable clothes. He always walked down the middle of the street so no one could surprise him. He was a sheriff of Abilene, Kansas when it became a big cattle town. When he wasn’t being a sheriff he was a big card player, and he was also a scout for the union army during the civil war. After the war he was a scout for a General Custer. He was good friends with Buffalo Bill Cody and put up with Calamity Jane. 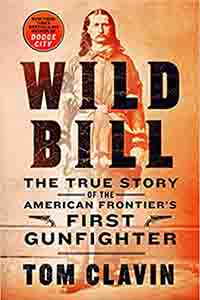 He feared no man, but what the public didn’t know was that he was suffering from Glaucoma, slowly going blind.

When he played cards he always sat with his back to the wall so he could see anyone approaching him. He lived knowing that he was always in danger because of his reputation as a gunslinger. There was always someone out there wanting to make a name for himself by knocking off the great Wild Bill.

He was also a star of Buffalo Bill’s staged plays about their exploits out West until he finally got tired of doing it.

Today he is also remembered through the Dead Man’s Hand, Aces and Eights, which he held when he died.

The book is full of anecdotes, especially concerning Calamity Jane and his relationship. The book offers a good insight into what a man had to do to survive in those times, between civil and Indian wars, and handling the law in towns full of drunken cowboys, feeling their Oates after a long cattle drive. A good look at how the West really was.