“He’s got a humdinger in this new high-level whodunit…a perplexing, multilayered, attention-holding mystery.”

We have all read The Name of the Rose and it won all the prizes didn’t it. So many years on I picked this 2010 book up at our local rubbish tip where you can do a book swap.

This is not a book to take on holiday. I read it bit by bit over three weeks in Canada and Alaska, on boats, in airports and on planes.

These are the worst places to read a serious book based on a million historical facts. This book deserves a study desk in a library so you can check out all the historical stuff he throws at you. 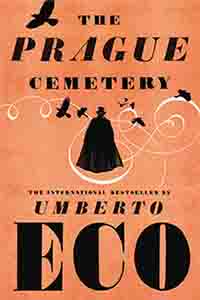 At first I liked the way he toyed with the main character Simonini and how he portrayed him as a likeable rogue, a chancer who sat between powerful people in Europe and took their money. He offset him against Abbe Dalla Piccola and hinted they were one and the same and that was a nice touch. But, as the book progressed it became historically complicated with far too many one line references to events and people so far removed from a normal man’s knowledge as to render the book unreadable.

There is also a layer of confusion on top of the history about Freemasons and Jews with Russian, French and Italian super powers thrown in. I couldn’t see the a clear plot, just a heap of history flopped into a book and going nowhere.

Frankly, Umberto Eco was frighteningly clever, god rest his soul but this book can go back to the tip and wait for another sucker to pick it up.