Val McDermid - Fever of the Bone

“She is the real mistress of psychological gripping thrillers; no-one can plot or tell a story like she can. The hairs on my neck literally stood up.”

Another cracker again folks. Carole and Tony are up against a tech-master along with a new Chief Constable who wants to sack the MIT team as well as to stop using Tony as a profiler. He wants the cops own trained profilers for ‘cost effectiveness’, read it as cheaper. However, our heroes are not so easily blocked.

A second plot line is Tony and his father. Carole has been trying to encourage Tony to find out more about the missing man, yet he stands solidly on his refusal. Help comes to Carole in two ways; first off, she becomes aware of Tony’s mother trying to defraud him of the estate his father had left him. West Mercia police have a case of a child murder and don’t know where to go with it. 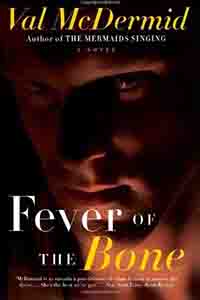 One of the team is aware of Tony and suggests they call him in to do a profile. With that, Tony travels to Worcester and he decides to look at the house he has been left, while he’s in the area. He frightens an estate agent the follow morning but that is soon sorted.

Then it’s back to Bradfield, (yes, I’ve wonder where name comes from, Bradford and Wakefield or Huddersfield? Only McDermid knows, and I think she enna saying!). The following morning, he is listening to radio when he hears a news item about a boy found dead and another boy who is missing. Carole is on the case and Tony keeps away from it.

MIT has a second case on the go, a cold case from fourteen years earlier where a man was tried for murder but acquitted. The bodies had never been found either, and now all those years later a bright young detective, Sam, starts looking at it again. Both cases role along to a satisfying conclusion.

I’m not sure how many of McDermid’s books I have read now, but I do have four or five more in my TBR pile waiting patiently. Now I’m wondering if I can get the Wire in the Blood series on DVD. There’s a place in town where they sell second hand copies, maybe a visit is on the cards. However, I have enjoyed this book a lot, so gone on, you know you want to, give her a go.