“McDermid never pulls her punches in her graphic descriptions of the evils men (and women) inflict on each other…tension filled from start to finish.”

Jacko Vance escapes from prison and sets out on a path of revenge; that is what the main thrust of this novel is about. Of course, Tony Hill and Carol Jordan are at the top of his list, but Tony makes a serious error of judgement in the hunt for Vance.

There’s a second story line within this one though, the bodies of a number of street girls begin to appear within the area of Bradfield and MIT is called in to deal with it, there by upsetting the original investigators.

The town has another serial killer on the loose and that is why MIT is given the case. I have to admit to feeling relived that Bradfield is fictional town. A town with the number of serial killers, the place can’t be all that safe can it! Carol would like to bring in Tony Hill but with the budget constraints being imposed by the new Chief Constable, she won’t allow him to work for nothing. One of her team does so anyway, but keeps it on the QT from Carol. 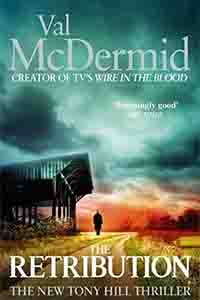 After the intro, the story begins in Worcester while Carol and Tony are in the process of moving there. Carol has already annoyed one DI in her new team, although most are willing to give her a chance to proving herself. Vance escapes and that comes under the remit of West Mercia police part of the story moves between West Yorkshire, Worcester and Hereford. It ends in Halifax – but not I’m saying how!

This is the fourth book by McDermid I’ve read now, and I have enjoyed them all. The next one in the series is proving a little difficult to pin down but I’ll find it soon enough. As you can tell from this paragraph I’m enjoying her books and I’m looking forward to the next one (there’s two more in TBR pile), to keep me going. So, my friends; if you haven’t tried here books, please do so, she is worth the cash and time.