Victoria Helen Stone - Half Past

“A captivating, suspenseful tale of love and lies, mystery and self-discovery, Half Past kept me flipping the pages through the final, startling twist.”

Hannah Smith, at the age of 45, finds herself without a job, a failed marriage and no kids. She returns home to relieve her sisters of their caregiving duties, towards their mother (who is suffering from dementia) for a while.

While going through her mother’s medical records, she has a shock revelation. Hannah’s blood type was O-negative, making her a universal donor.

It is no rocket science, that an O-negative offspring couldn’t possibly have an AB-positive parent. However, he mother is AB-positive (and confirmed by two different tests). 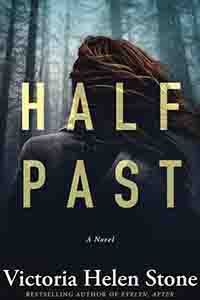 She obviously wasn’t her mother’s daughter, though she looked like her father (who expired some years ago). So, what was her story? There wasn’t enough of her mother’s memory left to find out the truth.

She decides to trace her roots, to California, let slip by her mother in one of her lucid states.

Here’s where the plot failed me. The build-up was slow and I sort of lost interest. I also had hard time relating to Hannah, as her actions seemed a bit ludicrous.

The plot had a promise for much more, and I had expected more from the book. The twists and turns didn’t seem very exciting either. However, the booked redeemed itself a bit at the end, when the horrible truth is revealed.