“What Prison Days does is capture a more idealistic time when the country was united in the freedom struggle.”

Nehru’s sister Vijaya Lakshmi Pandit did her time in prison three times over for responding to Mahatma Gandhi’s call to join the freedom struggle. With her were her brother Jawaharlal and her husband Ranjit Sitaram Pandit. Prison Days is an account of her third bout of imprisonment, when she was confined to the Allahabad Central Jail in August 1942.

World War II was in progress, security measures were almost Draconian and Pandit, a solitary woman, was taken from the Nehru home, Anand Bhavan by what was almost force majeure, lorries filled with armed police late at night. Later she was joined by her niece, Indira Gandhi and the two lent each other books. 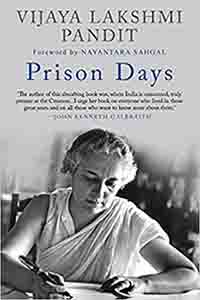 Like her brother and husband, Pandit kept a diary of her days in prison, as her other family members did. It consisted of accounts of mildewed food, stewed tea that was very different from the exquisitely fragrant variety that Madam Chiang Kai Shek sent her and a talkative matron who went on about her life while Pandit listened silently. Despite the desperation she felt at being confined while others were risking their lives all over the country, Pandit maintained her sense of humour. What Prison Days does is capture a more idealistic time when the country was united in the freedom struggle – Pandit’s detailed accounts provide an intimate, invaluable record.