Sam Peckinpah, a Revolution in Hollywood, and the making of a legendary film.

“Sam Peckinpah’s classic western is lovingly picked over in this obsessive treatment of its making and reception.”

This is the story behind the making of one of the greatest western films of all time. Controversial for its extreme violence and gore, The Wild Bunch broke new ground in its genre.

The story centered around a gang of rustlers at the end of the days of the great west, where after pulling off a train robbery head into Mexico, only to get caught up in the Mexican Revolution.

They agree to rob guns for one of the generals in the revolution, get paid in gold, and retire from the life. But things never go as planned and the group finds themselves putting their lives on the line for one of their own, resulting in one of the greatest filmed gun battles ever filmed. 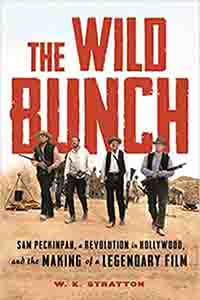 The film was shot entirely in Mexico, with many Mexican actors and production people, something extremely rare then and now. Sam Peckinpah was fighting alcoholism, and his own reputation for someone uncontrollable.

It’s cast including William Holden, Robert Ryan, Sam Johnson,Warren Oates and Ernest Borgnine brought together a group of very seasoned actors, who all gave terrific performances to bring to the screen something really ever seen before.

If you love movies, and love to read how they are made then you will definitely enjoy this book.

If you have never seen the film, watch it and then read the book as you will enjoy this book so much more.