“This book is a work of fiction, that imagines an England where being LGBTQ+ has been criminalized. Homosexual acts between two men in England and Wales were first legalised in 1967, and in 1982 in Scotland and Northern Ireland. Being LGBTQ+ is still illegal in many parts of the world. For more information, visit humandignitytrust.org. LGBTQ+ people are still discriminated against every day in countries where being LGBTQ+ is legal.”

William Hussey’s The Outrage is an LGBTQIA+ young adult novel that combines the genres of dystopian or speculative fiction with romance and thriller. In this face-paced, actioned-packed novel, Hussey imagines a Britain in which rights, in particular for the LGBTQIA+ community, have been rolled back. Following an event called ‘the outrage’, in this novel England is now ruled by the Protectorate who enforce the ‘Public Good’, governing what people eat, wear, say, read and think. Being LGBT+ in this Britain makes you a ‘degen’ (degenerate) and will result in you being sent to a ‘Repurification’ camp. 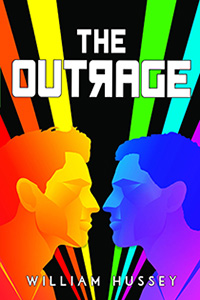 The book’s main character, Gabriel, is a natural-born rule breaker and his biggest crime in this world is, of course, being gay. Gabriel knows that to survive, he must keep his sexuality a secret not only to protect himself but also to protect his boyfriend, Eric, who also happens to be the son of the chief inspector at Degenerate Investigations, the one man who poses the biggest threat to Gabriel’s safety.

In his novel, William Hussey draws directly from history to paint a world in which LGBTQIA+ people have no rights and are in danger, a fact that is still true in many countries across the globe. Hussey references Section 28, a British law that banned any ‘promotion’ of homosexuality in local authorities such as schools. This law was not revoked until 2003 so many older readers may already be aware of it, however, for younger readers, this is a chance to understand the history of LGBTQIA+ education in schools.

Hussey also writes about chemical castration and aversion therapy that takes place in the ‘repurification camps’. These tortuous methods were meant to ‘straighten’ gay people out and although fictionalised in this YA novel, these were real methods used in Britain.

The Outrage also serves as a reminder of how gay people were treated in Britain’s past and it highlights the way that trans people are treated today, in particular in the media through negative representation. This novel is therefore a call to young LGBTQIA+ people and their allies to continue fighting for the rights trans people. What’s more, Hussey’s novel showcases the importance of representation and seeing yourself reflected in films, TV, books etc.

As well as exploring LGBTQIA+ lives, the novel also examines other issues in society that are currently already problematic but could potentially get worse in an extremist, post-brexit Britain. Hussey writes a world where immigrants are also seen as degens, food is rationed, there’s no healthcare service, and libraries have been closed. Gabriel tells one of the other characters, “My dad once told that they came for the libraries first “not smashing and burning, not in the beginning,” he said, “but claiming no one used them and closing them down one by one… when they take away the places that help people think, sometimes they stop thinking altogether.” The Outrage is therefore a reminder that we cannot get complacent in the fight for rights, equality and freedom.

William Hussey’s The Outrage is a young adult novel that is reminiscent of other dystopian fiction that came before it including; The Handmaid’s Tale, 1984, Fahrenheit 451, and The Hunger Games. This is a truly gripping novel that uses a narrative that darts back and forth in time to build tension and create a vivid back story for the characters. The action and fear for the characters begins in chapter one and hooks you in immediately.