William Ryan’s The Holy Thief is his first novel, and the first in a series set in Soviet Russia and featuring Captain Korolev, a militia investigator.

It’s 1936, preparations for the coming war are well under way and a revolution that feels under threat from all sides is doing everything and anything to survive. Even office politics can be deadly, particularly in the Moscow Militia, where an out-of-place joke can see you carted off to the Siberian camps of the Zone.

In this world we find Captain Korolev, a war veteran and a criminal investigator with the militia. And into Korolev’s in-tray comes the case of a brutal (and brutally described) torture/murder of an initially unidentified young woman. 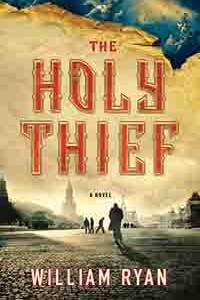 This being a whodunit, things don’t end there. There will be more deaths, and this first killing opens a squirming worms’ nest of politics, religion, greed, superstition and tradition. Along the way, Ryan introduces us to the political thugs of the Soviet state, the NKVD. And the thugs who hate the Soviet state, the criminals of the (admirably simply named) The Thieves, who have their own secrets and their own powers.

Korolev is very well drawn, and cleverly so. Few modern readers are going to love an out and out Stalin worshiper; but an anachronistically anti-communist militia man wouldn’t have been credible. Korolev fits cleverly between the two – he’s by no means a zealot, but he’s certainly a loyal Soviet citizen.

Neither is the history of Stalin’s Soviet Union used clumsily, I never got the feeling that I was being lectured, or that character or story was being misused to make a point about the Gulags, it all seems credible. In fact, I could have put up with a bit more, I would have loved to have found out more about the world of The Thieves, for example. Other details – the street children, the shortages, some great stuff on Moscow’s great football clubs – are nicely woven into the story.

The plot serves its page-turning function, though I suspect most readers will have solved the mystery a while before the solution is revealed.

I know a little about Soviet Russia, but I’m by no means an expert, and I don’t think you need to have very much foreknowledge of the NKVD or Komsomol to enjoy Ryan’s book.

I’ll certainly look out for more Korolev mysteries – there are three now – and I’m interested to see both how the Captain’s view of his country evolves, and how Ryan uses this pivotal period in world history as a backdrop. Recommended to any lovers of historical crime fiction.