“Every page offers something of tension, humanity, surprise, or even ecstasy.”

When Life of Pi was first released back in 2001 I have to admit I dismissed it as YA (young adult) fantasy, which isn’t a genre I’m really into. However, when the film was released it piqued my curiosity and I ended up downloading it for Kindle to see what all the fuss was about.

The story follows Piscine ‘Pi’ Molitor Patel, a boy from Pondicherry, India. In literal terms it follows his formative years and the adventure for him and his family that is emigrating to a new land. Life of Pi is divided into three sections.

Part 1 of Life of Pi really is the story-setter, as you would expect but the background on Pi, and how he got his nickname is a thrilling tale on its own. The story flutters along philosophically following the thoughts of this young Indian boy, growing up in a zoo, owned and run by his parents. The tiger, rhinoceros and the goats all have their place, as do spirituality, religion and very many metaphors. 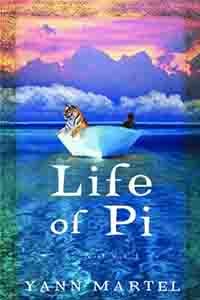 Things pick up pace with Part 2 and it’s where the adventure begins. I aim to make all of my reviews non-spoiler but let’s just say by the time I had read Part 2 of Life of Pi – something I did in about 3 hours straight – I felt like I had sailed a vast ocean, in a very small boat. Prepare yourself for an adventure, as that is exactly how you will feel!

And finally Part 3, the bit where it all comes to a close and you’re just left with the hole the characters leave. If you’re a reader, you’ll understand this sentiment perfectly, and three weeks after finishing Life of Pi, I don’t think I have ever missed a character so much as I miss Pi and his friend Richard Parker. That’s all I have to say about Part 3, oh, and it’s very rewarding.

I have no doubt that Life of Pi is one of those books that will stay with me forever, sometimes you just know and I’ve recommended it to everyone I have met since.