“Tackles the biggest questions of history and the modern world… Written in unforgettably vivid language.”

Well, this was long pending and I’m glad I made the effort to go back to this monumental book after not being able to complete HOMO DEUS an year ago(which I’m sure I’ll be able to appreciate more now when I revisit it).

Since I rarely read any non fiction, there is always a tendency to abandon it for a page turning thriller at the slightest hint of boredom. Harari makes sure that his brief history of ‘us’ reads like a thriller for almost the entire duration. Yes, there were a couple of chapters where it did feel like a drag and I promptly took a break by reading some James Patterson in between; and I did feel that there were too many repetitions at places and even entire paragraphs that could have been edited out. However, these were very miniscule and certainly ignorable irritants in an otherwise breathtaking and eye opening journey. 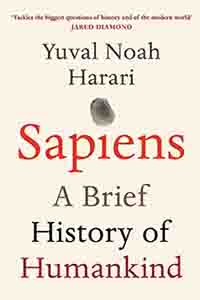 The best part was that the author was speaking with a pretty open mind and didn’t hesitate to admit that there were some things we just didn’t know and the best we could do at the moment was make educated guesses. It is this very curiosity and inquisitiveness that led to so many defining moments in history! Be it the explosion of Homo Sapiens from Africa all the way to Australia (and everywhere else enroute), the Agricultural Revolution (the history’s biggest fraud as per the other), the spread of Christianity & Islam, the discovery of America, the European conquests around the world, the Industrial Revolution – all of them can be attributed to our inquisitiveness.

The facts and figures have been presented wherever possible to substantiate or debunk a theory .There is an enlightening discussion on the ‘meaning of happiness’ as well which as per most scientists is purely biochemical and had little to do with material world.

I also enjoyed the way he explained that how we humans have created a number of mass fantasies/myths which have no physical, chemical, biological or even logical explanation but our very world has revolved around them. These include God, Religions, Communism, Capitalism, Liberalism, Currency, Stock Markets…. The list in endless.

He also makes some bold predictions for the future of our species but at the same time accepts that we could also see something totally out of the blue which noone saw coming(like the Internet explosion of the 90s/2000s). Infact, the sequel (HOMO DEUS) is dedicated for this purpose only.

Overall, an extremely enriching experience and a recommended read for everyone.

Provided that the reader has an open mind this is a well written and researched work If your version of creation is centered on some religious beliefs you might scoff at this history, for the rest of us…the author will take us on a voyage of …the primates who became Homo Sapiens or Humans.

Following the “Big Bang”theory of how the universe was created and the ions of years that passed until we showed up our time here on this beautiful planet begins.

As we emerged from Africa and populated the earth we have either assimilated to our environment or altered our environment to suit us. As we are the highest intelligence on the planet we hold the top spot on the food chain, we are also the most creative when it comes to inventing things for our use.

We are still evolving slowly so where evolution takes us is of course unknown…that is if we survive.

I found it a very informative work and it does touch somewhat on every aspect of our history, civilizations that rise and fall, finance, technology are some of the highlights. I highly recommend as I think it delves into many areas of our history I haven’t thought about.

I do hope many will read this and give some thought to the history of us.