Yve Gibney - Face of a Bigamist

“This is a heartbreaking, but ultimately redemptive story of one woman’s fight for justice and survival after what felt for years like crippling humiliation.”

A riveting tale of the ultimate betrayal. Senior NHS nurse Yve had a happy marriage to the father of her son. They were the life and soul of their social circuit and considered by friends to be ‘the couple least likely to split.’ His work took him abroad, which naturally came to put a little strain on the relationship, but they spoke every day. One evening, soon after he’d sent her flowers and champagne, she was scrolling through Facebook and came across photos of her in-laws in wedding outfits…. 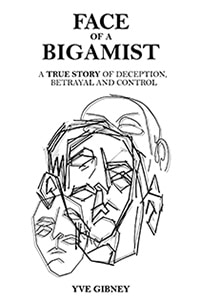 Yve turned amateur sleuth and exhaustive detective work revealed that her husband had lied to his his family about getting a divorce and married another woman in plain view. This is a heartbreaking, but ultimately redemptive story of one woman’s fight for justice and survival after what felt for years like crippling humiliation. She is strong and powerful once more and says ‘if I can survive a breakup, anyone can.’