“If you’re a lover of all things bookish and are in Paris, this store is not to be missed.”

“If you walk inside, you can find everything and anything you might want or did not know you wanted.” 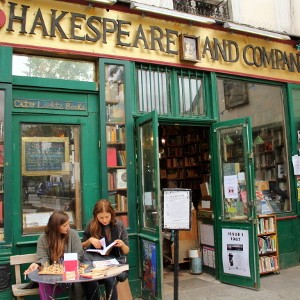 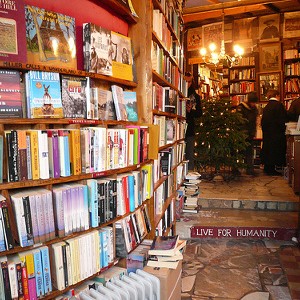 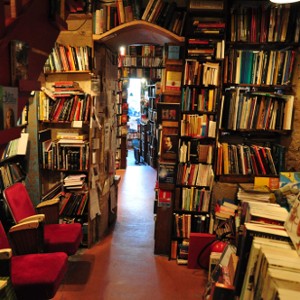 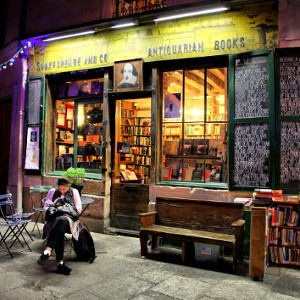 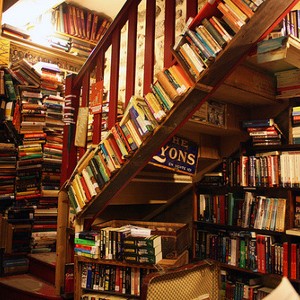 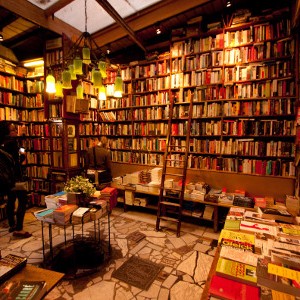 Located at 37 rue de la Bûcherie in the 5th arrondissement of Paris, Shakespeare and Company stands almost adjacent to the Notre Dame. A charmingly comical site: A small and shabby seventeenth century bookstore versus a towering and transcendent piece of Gothic architecture. Yet the Shakespeare and Company store is monumental in its own right. It is a historical and literary landmark that has made its way into films such as Linklater’s Before Sunset and Woody Allen’s Midnight in Paris, as well Hemingway’s memoir A Moveable Feast.

In 1919 Sylvia Beach established Shakespeare and Company in the 6th arrondissement of Paris, functioning as a library and bookstore. In the 1940s the store became the centre of Anglo- American literacy culture and modernism in Paris. Writers and artists of the “Lost Generation” such as Earnest Hemingway, F. Scott Fitzgerald and Man Ray spent a great deal of time there reading, researching and writing. Indeed, perhaps part of its popularity was its purchasing of banned books such as D.H. Lawrence’s Lady Chatterly’s Lover, and Joyce’s Ulysses which was later published under the Shakespeare and Company imprint. James Joyce nick- named the store Stradford-on-Odéon, and it is no surprise that his was one of the largest collections to be on display on the ground floor.

In June 1940, the store was forced to close during the German occupation of France during World War II, but in 1951 George Whitman, a contemporary of Jack Kerovac and Allen Ginsberg, founded another English- language bookstore, Le Mistral in the 5th arrondissement. After Sylvia’s death in 1964, Whitman renamed his shop Shakespeare and Company in honour of her. Much like its predecessor, the store was a cultural and intellectual success from its opening and was a haven for many members of the Beats Generation who quickly made their home there. All Whitman asked of his visitors was to read a book a day and a two hour contribution to the running of the store. Now, nearly sixty- five years later, not much has changed.

In this three- floored store, shelves of books fill every nook and cranny from floor to ceiling. Downstairs you can find a large variety of new books in many editions, whilst upstairs is filled with second- hand volumes, most of which you cannot buy but are free to read. An ideal safe- haven for both readers and writers, an estimated 300, 000 aspiring writers have inhibited the armchairs, settees and beds that are offered for comfortable reading and overnight shelter. Small desks and typewriters also occupy upstairs which you can use whilst also feasting upon an incredible view of the Notre Dame and River Seine. Stepping into this time warp, Shakespeare and Company not only appeals to the academic, but also the Romantic. Small, quaint and charming, this store is not a money- grabbing profit machine; it is a place of contentment where we have the luxury of passing time with the greatest of minds.

Any book- lover is pleased to stumble upon a bookstore these days, and in my opinion, the older the better. So If you’re a lover of all things bookish and are in Paris, this store is not to be missed. With a wide range of genres including philosophy, history, art and music, this is both a readers and writers paradise. With the subtle smell of antique volumes, the vintage literary wall art and the excited chatter of fellow book- lovers, it feels as though the voices of all the greatest writers and philosophers are reaching out from the shelves and whispering to you “Read me…”

Shakespeare & Company, Paris is nominally in rue de la Bucherie but actually is on the Seine, Quai de Montebello, right in front of the Ile de la Cité. It is a weird mixture of new and second hand books in English. The new part is in the front of the labyrinthine ground floor but if you walk inside you can find everything and anything you might want or did not know you wanted on sets of rickety shelves tightly packed, often in double row. A niche hosts an old typewriter and a wall board where people write and leave messages for posterity. Books are divided by subject, if I remember well, and wherever you turn you discover another shelf in a new corner you had not seen before. LOTS of fiction. Up a flight of very narrow stairs, more books – these are mostly old classic and not for sale. A front room with wide old couches functions also as a sort of improvised hostel: from what I understood, young people finding themselves stranded in Paris can ask for a roof and a spot of rest. It is indeed very peaceful – I risked falling asleep with the people browsing downstairs and the floorboards creaking and the light from the wide window on the Seine and of course the old bookshelves all around.

However. This is a quaint place and I’m sure on the net you will find everything about those who own it but I also found it slightly intimidating, although I don’t know why. Maybe because they know it’s a quaint place and much more than just a bookshop – all American and English writer of renown have spent some years in Paris and they all liked to camp here – So – on the one hand new books are pricey and the sheer quantity of old books is almost discouraging – on the other hand it feels like selling books it’s not really what they ARE. However if you have time to go back a couple of times and get to know the place it’s very wonderful.

Leah Nayer also told us about her literary adventures to Paris in a feature piece.