Manjiri Prabhu - The Revolt of the Lamebren

“The language she uses is easy, slow paced enough to get the story over to the teens without slowing down the excitement of the events that she describes.”

The Revolt of the Lamebren has in its background a tribute from a sci fi fan to a classic sci fi film, Soylent Green. Prabhu writes about a space where certain people are born with a termination date.

She takes this theory and moves on to create a world that will appeal to today’s young adults. Sixteen is the cut off time but few of the ordinary inhabitants of the Super-Dome, the Lamebren are aware that they will be culled. Society in the Duper-Dome is divided between the Altklugs who are super-efficient and super brainy. 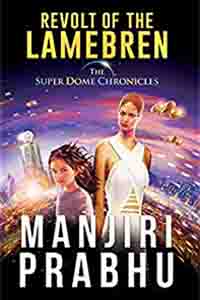 Zinnia, a Lamebirl – a Lamebren girl – discovers the conspiracy that lies at the heart of her world and she and various others grapple with the issue, wondering how to get around it or escape it. The termination is of course left to the Altklugs who create a monitored, guarded and repressed life for the young Lamebren reminiscent of many Big Brother states that we are familiar with.

Prabhu sketches the details of the world with great care, no easy task when every detail has to be conjured up from scratch – the old-fashioned charabanc materialises as Super Dome transport. She also has the task of ensuring that Zinnia and her friends retain their human quality rather than coming across as aliens. There is an undercurrent of Hunger Games to the story too, the survival of the fittest and escape from the various cabanas and chambers that have been made to control the Lamebren – they answer to numbers for example, rather than names. However, not all the Altklugs are bad, some are sympathetic because they know the secret of the culling and because they respond to the Lamebren as people rather than objects.

The author seems to have chosen alternate worlds as her field for young adults rather than the mysteries she dabbles with for adults. The language she uses is easy, slow paced enough to get the story over to the teens without slowing down the excitement of the events that she describes.

Zinnia is the type of heroine that most young adults will relate to – not perfect, aware of her own weaknesses and determined to get the better of them, occasionally dong things that from a Lamebren perspective may be considered suicidal. There is also romance to add to the intrigue and offset a political scenario that many readers will find all too familiar.