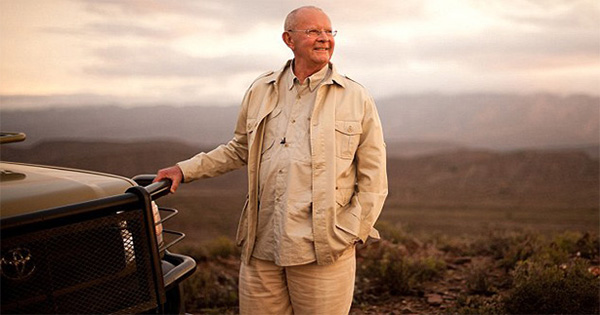 Born in Zambia in 1933, Wilbur Smith was born into a life many of could only imagine, and into adulthood and throughout his life, he poured that life out through his typewriter and onto the pages of nearly 50 adventure novels. In his younger life, Smith hoped to become a journalist, but his father encouraged him to get a ‘real job’, and so his first foray into professional work came as a chartered accountant.

While working for the Inland Revenue, Smith had plenty of spare time and it was during the long evenings he would sit to his typewriter and write, and published his first short story for £70, twice his monthly salary.

In 1964, Smith would publish his first novel When the Lion Feeds the tale of a young man growing up on a South African cattle ranch. The book became an instant bestseller and led to 15 sequels, tracing the family through more than 200 years. The series would become the longest running literary series of all time, spanning centuries “through critical periods from the dawn of colonial Africa to the American Civil War, and to the apartheid era in South Africa”, said his publisher.

During his younger life, he was also a big game hunter, having grown up experiencing the forest, hills and savannah of Africa on his parents’ ranch. He also held a pilot’s licence and was a scuba diver. Later he would become a conservationist, managing his own game reserve and tropical island in the Seychelles.

In 2018, Smith published his memoir On Leopard Rock where he recounts having had “tough times, bad marriages … burnt the midnight oil getting nowhere, but it has, all in the end, added up to a phenomenally fulfilled and wonderful life. In it he says “I want to be remembered as somebody who gave pleasure to millions,” and on that count, we think he could count his life to be an utter success.

Wilbur Smith died at home in South Africa on Saturday after a decades-long career in writing, his office said. He was 88. No cause of death has been given.