The 1948 Election and the Battle for America's Soul

“The 20th century’s most exciting presidential campaign finally gets its due, and with it, A.J. Baime ascends to the pinnacle of Truman biographers. One knows how the story will end from the moment reading begins, yet Baime’s ability to paint an historical canvas shows in new and vivid details why this greatest election surprise in our nation’s history still captivates, resonating today with new insights into our own political divisions. This is the way history should be written.”

Just finished Dewey Defeats Truman. The 1948 election and the battle for America’s Soul by A.J. Baime Non-Fiction.
This retelling of the famous 1948 election is actually very relevant today. As now, the country was divided over civil rights, communism, the Cold War and Nuclear Weapons. President Truman was way behind in the polls with less than a month to go until election night. He was so far behind that some pollsters actually stopped polling. Thomas Dewey, Governor of New York and his running mate, Earl Warren, Governor of California had an insurmountable lead. The only person who felt that Truman could win was Truman himself. 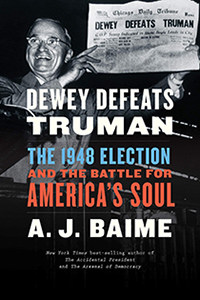 He began a whistletop tour of America by train, stopping many times a day to give impromptu speeches, attacking the Republican Congress at every stop. And the crowds started to grow and grow.
It’s a fascinating story that will keep you on the edge of your seat as Election Day looms closer and closer.
A brilliant book and a must read for anyone interested in Presidential electoral history.