“The deeply personal follow-up to Alan Partridge’s deeply personal autobiography, I, PARTRIDGE, charting the highs, lows and mediums of his one-man walking tour around (certain parts of) Britain..”

Alan Partridge is back and this time he’s decided to embark on an epic journey that will take him literally hundreds of miles across Britain as he retraces his father’s footsteps. Alan Partridge is a Nomad (though he’s keen to stress that he does indeed own a house and is not by any means homeless).

Like many Brits, I love a bit of Alan Partridge and Steve Coogan’s character has become an icon of British comedy like David Brent or Del Boy. I’ll save you the suspense, if you’re a fan of Partridge then you should absolutely check this book out. It’s written as a kind of travel diary written by Partridge after he decides to walk a journey across the country that his father also embarked on years earlier. 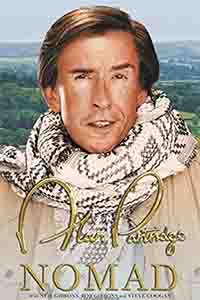 Along the way Partridge imparts some of his wisdom, recalls anecdotes from his life, and recounts his rivalry with an elderly pensioner at his local swimming baths.

Part of Partridge’s appeal is, whilst being vain, mean, and somewhat of an idiot, you can’t help but feel sorry for him. He’s a mediocre man trying desperately to validate himself with fame and success. Most of the time he’s his own worst enemy, and his success as a character no doubt partly comes from the fact he highlights the insecure part of ourselves. He’s also bloody funny.

If you’ve enjoyed Partridge’s past outings of cringeyness then you’ll love Nomad. What would be a simple walk for most people tests Alan to his limits and sees him taking on challenges that are almost all his own doing. You know his journey is going to be interesting when he begins by packing so much into his backpack that it weighs more than an SAS soldier carries. Along the way he battles against the elements (a bit of rain), meets a Shepard who may or may not have been Jesus, faces death from a foot infection, and marvels at Clair Balding’s great head of hair. There’s also a particularly good bit where Alan is forced to channel his inner Bear Grylls when he finds himself lost and alone for four hours in a nature reserve.

As I mentioned earlier, it’s not just the walk itself that provides humour. Alan regales the reader with several stories from his past, including what really went down during the events of Alpha Papa, his hatred of Noel Edmonds, and how Yewtree has left all radio personalities terrified of children. Long time fans of Partridge will find this book to be every bit as good as his previous exploits, but it’s also a great way for new fans to jump on board. You don’t need to be up to date on all of the Partridge lore to enjoy this romp across Britain.

I’d also like to suggest that, before you rush out and buy the book, you consider checking out the audiobook. It’s read by Coogan as Alan Partridge and I found it even funnier to have Partridge narrating his own adventure. Just be careful where you listen to it, I got some strange looks at the gym as I chuckled to myself at the absurd situations Partridge got himself in. This is definitely the sort of book that will make your commute fly by.

If you’re looking for something light that will make you laugh then you should look no further than Alan Partridge: Nomad.