“A novel of complex motivations that will test readers’ capacity for empathy, Good Me Bad Me is already a strong contender for debut of the year.”

Ali Land’s debut is a chilling and interesting treatment of the subject: what happens to the children of psychotic criminals?

Annie is the abused daughter of a serial killer mother. A killer whose targets were innocent children.

The book opens with Annie turning her mother in to the cops, when things have gone beyond bearable. She tells a detective everything – well, almost everything – of the horrific things her mother has been doing over the last few years. They assure her to go back home and behave normally, and they will come at night to make their arrest.
They do.
Her life changes in one night. 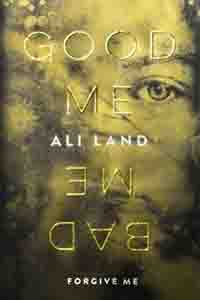 Annie becomes Milly and put into the care of foster parents, Mike (a psychologist) and Saskia Newmont. They have a daughter, Phoebe, of the same age as Milly. And finally, Milly feels she can belong, or can she?

Phoebe hates Milly and bullies her to no extent. The terrorising at school gets worse with each passing day. Soon, Milly also begins to see the cracks in the “perfect” Newmont family. All the stress adds to her already fragile mind. She regularly hallucinates about her mother and is unable to sleep at night.
The only saving grace in school is Ms Kemp, her guidance teacher and Morgan, a friend outside school, who also has some equally dark secrets.

As her mother’s trial looms, and Milly is being prepared to get on the witness stand, to testify against her own mother; she cannot help but feel a sharp sense of foreboding.
Her mother will be vindicated – but what will happen to her?
Will she continue living with the Newmonts?

The writing is unique and compellingly different, short and sharp sentences where every punctuated word packs a punch. Disturbing, chilling and haunting. Nothing very detailed, most left unsaid, yet the simplicity of the description conjures up a thousand pictures of a brutal and horrific childhood. The imagination runs rampant, as you crave for more.

The author brings into focus human conditioning through violence and pain. Your empathy will be questioned as you try to lend support to a girl’s fight against the emotional grip from the only parent she has. A mother’s love which disregards everything good, decent and loving.

Milly’s voice will shock you, it’ll frighten you, and it’ll break your heart. It’s a voice that reflects every second of the minute of the hour of the day of the week of the year that she’s spent being frightened and forced to play a part in her Mum’s terrorising ways.
Milly’s voice is questioning, conflicted and separated into good and bad; her own words. Trying to be different to everything she’s known. Trying to desperately find normality in a world in which she feels lost, lonely and isolated. Trying to grasp at any human decency and contact she possibly can.
Is everything as it seems?
Can everything turn out the way she wanted?

A brilliant debut!
And oh that cover!! Super ❤️
The only reason it’s 4/5 for me, was because I could predict the ending.