Alwyn Hamilton - Traitor to the Throne

“Traitor is full of compelling twists and turns, and the ending will leave readers highly anticipating the final volume in the Rebel of the Sands trilogy.”

I read the first book in the Rebel trilogy last month just before Traitor to the Throne was released so I had the second book all lined up and ready to go as I finished the first. Book one was amazing so the second book had a hard act to follow but follow it it did in this fantastic YA fantasy trilogy.

The second book picks up the story several months after the big fight out at the end of book one, and you are diving straight back into the action as Amani’s adventures continue, along with Jin and the Rebels.

The follow up in the Rebel trilogy is as fast paced and gripping as the first, but the scenery has changed and the second book has somewhat lost that ‘Western theme’ of the first novel. That isn’t a criticism, I love Persian culture and book two stays close to that, weaving legend, magic and politics into a fantastic story or war and espionage. 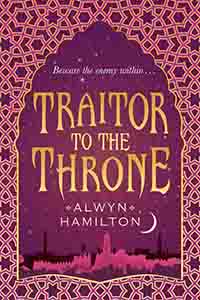 Traitor to the Throne is a hefty read, coming in at over 500 pages and much of this is spent on the development of Amani’s character. We’ve learned about her strengths in book one, we learned of her powers, now without any of that, we learn about her. Be in no doubt, Traitor to the Throne is very much Amani’s story and while thrilling, fast paced and full of action, it’s not always a happy one.

Often the middle book in a trilogy can drag, it’s all about building plot, but Hamilton avoids that here with plenty of page-turning action where every little act is climbing to that big finale. And what a finale it was, the end builds over the last 150 pages and is really well done, get ready to have your heart broken!

I can’t wait for book three, this is my favourite YA fantasy series right now!