Amor Towles - A Gentleman in Moscow

“Charming … shows that not all books about Russian aristocrats have to be full of doom and nihilism.”

This is such an unexpectedly feel good book in a way. Unexpected, because it is the story of a man who is essentially under house arrest, or to be more precise, hotel arrest!

Count Alexander Illyich Rostov is, in 1922, sentenced to remain for the rest of his life in the Metropol hotel in Moscow for the ‘fault of being born an aristocrat’ as he so succinctly expresses it. A gentleman of leisure who has never worked a day, precisely the reason why he is deemed an enemy of the Bolsheviks who have taken control after the revolution, has to now accept that in his early thirties, his life has changed immeasurably and permanently.

And so begins the new ‘life’ of the gentleman, in his much diminished living quarters in the attic of the Metropol. Leaving no time for the reader to wonder about what story can possibly be told with such a restricted protagonist! 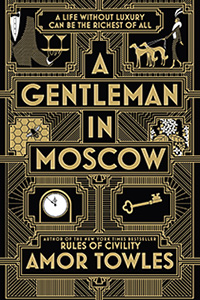 The Count is quite simply the life of this story. Erudite and polished, he never elicits sympathy for his reduced circumstances, only admiration for his dignity and unfailing politeness. Even his memories of his earlier life…his education, the apple trees in full bloom on his vast estate, the many important people he had occasion to meet and the soirees he enjoyed are at the most wistful and never nostalgic as he reconciles to his new situation.

Trying to remain upbeat or at least relevant in his own mind and stave away despair, he manages to fashion a routine for himself, incorporating exercise, reading, proper diet and interaction with those of the Metropol’s staff members who have grown to admire and respect him.

As Russia sees a plethora of changes, some of which are initiated in the Metropol’s many dining rooms and ballrooms, the Count is an observer. History, philosophy, culture,wit and humour are excellently juxtaposed as within the confines of the hotel, friendship, companionship, love, politics and a myriad of other experiences happen to him. Over a period of 30 years, he sees almost everything familiar to him change but soldiers on, choosing to share his knowledge with those he meets. I loved the self-assurance of this gentleman who adapts himself to every situation so well, whether he is confidently correcting a waiter’s wine recommendation, proudly extolling to a sceptical German the many contributions Russia has made to the world or taking on a role that is the very antithesis of everything his former life represented.

Definitely a unique way of recounting history, where it comes to an individual who cannot go to it himself,the narrative steers clear of favouring anyone or providing strong opinions, limiting itself to tongue in cheek comments about the behaviour of all the parties instead. For me, the writing just flowed in a way that a nearly 500 page book did not seem big at all!

I was so invested in the Count’s doings that I didn’t want his tale to end. Most deserving of all the rave reviews, this one!