Amy Schumer - The Girl with the Lower Back Tattoo

“Honest, humble and hilarious throughout, a great read for anyone who is a fan of Schumer’s stand-up, sketch comedy or film work.”

Comedian, actress, writer, producer and director Amy Schumer is becoming an influential figure in the entertainment world and now she’s written a book. Her book is pitched not as a biography per-say but as a collection of stories from her life about her family, relationships, sexual encounters, her career and experiences that have shaped her as a person.

Schumer’s book darts back and forth in time from one story to another in her life but still portrays the ups and downs of her life and how it’s changed from childhood through her teenage years to adulthood. Mapping her career Amy’s book follows the comedian’s working life from waitressing alongside small stand-up gigs where half the audience were her friends and family to selling out at venues on her world tour. 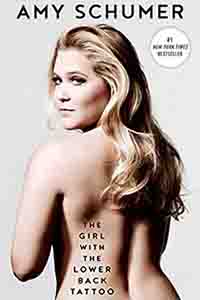 Schumer’s family, in particular, her sister Kim and brother Jason feature heavily in her life and her book (her sister even features in her TV show, Inside Amy Schumer). Their close bonds are clear in the stories she tells from her childhood – some happy, some sadder tales but all of which have made her the woman she is today. Several of these tales from Schumer’s childhood are told through extracts from her teenage diaries, accompanied by notes from present Amy. This style of narration is not only unique in providing information on Amy’s younger days but definitely, creates a humorous read – and one that many young women can relate to.

Another big part of Schumer’s upbringing was, of course, her parents but more specifically her father who has Multiple Sclerosis (MS). Amy talks openly and frankly about her father’s illness including some very honest accounts of experiences Schumer has had as result of her father’s illness.

Readers who have watched Schumer perform stand-up will be no stranger to her talking openly about her sex life and relationships. This is another subject that Amy tackles head-on in her book with the same honesty seen on stage. Amy Schumer reveals some difficult issues she has had to faced in her relationships including the loss of her virginity which she believes in hindsight to have been rape.

She also confessed that without realising for a long time, she was a victim of a controlling relationship which escalated to a violent end. Opening up in this way about domestic violence and rape is not only extremely brave but also tells women that anyone can be a victim and we should not be ashamed of ourselves but should instead try to speak up to get the help and support we need.

On a lighter note, The Girl with the Lower Back Tattoo is honest, humble and hilarious throughout. A great read for anyone who is a fan of Schumer’s stand-up, sketch comedy or film work as it delves deeper into the real Amy revealing a woman we can probably all relate to in one way or another.